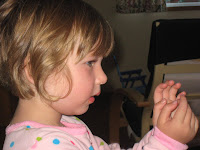 Mae: Are we going to have bessert now?

Grandpa: Laughs. But we just finished breakfast! And don’t you mean dee-ssert?

Mae: That’s what I said, bee-ssert.

Grandpa: Ah, I see. Bessert is something sweet after the meal.

Grandpa: Dee-ssert is something we have after dinner, yes?

Grandpa: Maybe bee-sert is something we have after breakfast.

Grandpa: Oh, my . . . you said it perfectly! But now, since we finished our cereal and fruit,I guess we need some bee-ssert. Would you like jam on your toast?

Mae: Smile breaks into a head-thrown-back, open-mouthed laugh. Sure!
at 10:25 AM No comments:

A summer and an era—endings of both were celebrated yesterday by Karen’s family at its summer home on Hood Canal. My hubby and I were lucky enough to be included, and I’ve thought of little else since. This was the opportunity to hug, and be hugged by, the people Karen held dearest—to console, and be consoled by, each one singly and collectively: her sons, sister, brother, and neices, as well as their partners and children. This was their first family gathering at the canal since her death last month.

In its second generation of owners, the summer-house is a kaleidoscopic kind of place, cozied up with comfy furniture ranging from overstuffed chairs and sofas to an assortment of stools and benches. It feels like a family quilt with its jumble of levels and rooms added over the years and unified with paneling and wall art in the same way quilt pieces are overlaid with stitches. And it’s as comforting as a quilt, too, with its nooks and crannies. The front windows and generous deck face the serenely beautiful fjord known as "the canal."

Yesterday’s gathering included about two dozen people, ranging in age from two to seventy. We were the only people not related by blood or marriage. Adults and the older children roamed (depending on the weather) from beach and dock to the house, to the house two doors away belonging to Karen’s nieces, and back again. Blustery rain continued to blow in, but periods of hopeful clearing brightened the sky throughout the afternoon. Conversation abounded, accompanied by commensurate laughter and tears.

With the house as the setting, this reminiscing and talking about Karen felt exactly right. I haven't been at the house a lot, and never without her being there, or, for that matter, her mother, Kay—the matriarch who ruled over events with power and presence. Kay died in 2008. I could feel them both. The house seems organically to lodge the spirit of the clan. Everyone brought food and beverages to share, with many of the items made from Karen’s favorite recipes. Everything about the afternoon reflected a family who is at ease with itself even in grief.

On our way back to Seattle (my hubby drove, which allowed me to became a pensive passenger), I reflected on the conversations I’d had. Although I’d had a chance to talk with almost everyone, there were so many things I had wanted to say, especially to her sons. But for some reason I didn’t. Either time ran out or I wasn't listening closely enough to my heart. So although satisfying, the afternoon felt unfinished, too.

As I stared out the window, I noticed color in the sky. “Look,” I said to Hubby, “straight ahead . . . a rainbow!” Right there, visible through the front windshield and glowing from the gray, turbulent clouds, colors were getting brighter by the moment. Within a minute or so, we could see the entire arch. We could see both of the rainbow's ends and quipped that we might be able to drive underneath it.

As if bumped off a shelf, another memory plopped itself into my consciousness: Karen’s reaction to hearing “Over the Rainbow” in a broadcast of Tim Russert’s memorial service in June 2008. She told me how moved she was by the singer’s beautiful voice and simple ukulele accompaniment, and wondered who the artist was. I immediately knew: the song was recorded by the late Israel Kamakawiwo'ole (“Iz”). I sent her a link to a YouTube video of his rendition of the song.

Several times she profusely thanked me in the days that followed. Maybe because she knew it wouldn’t be long before she followed Russert and, for that matter, Iz himself, or maybe because it offered her hope and beauty in the face of her own dwindling health, she purchased the album so she could play it as often as she liked.

As I looked at the rainbow last night, I found myself wishing I had taken a copy of the song to the canal house to play to in the presence of her family. I felt inordinantly sad about having forgotten such an important thing: she loved "Over the Rainbow" by Iz. But as the colors faded, I realized that’s how it is with those who’ve gone on ahead. The littlest thing can trigger a memory of a shared conversation or event and we relive the moment. That’s how we keep those dearest to us in our hearts. It's OK, I thought. There'll be other chances to share, and I felt grateful and content.


To listen to Iz sing “Over the Rainbow,” click the title of this post, or paste http://www.youtube.com/watch?v=0ltAGuuru7Q into your browser.
at 2:59 PM 3 comments: