When we arrived at Uncle Billy’s Hilo Hotel, we made arrangements to 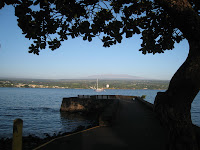 meet our travel companions, Mike and Jane, in half an hour so we could enjoy the remaining daylight. After the long flight from Seattle to Kona and the drive from Kona to Hilo, we were all eager for what we’d come the distance to enjoy—the sun, ocean, and ambience of the big island. After quick unpacking and washing-up, the four of us headed on foot along Banyan Drive to Queen Liliuokalani Park on Hilo Bay. There we walked through winding paths and over footbridges, enjoying the largest formal Japanese garden outside of Japan, to make our way to views of the surf. I could feel myself relaxing.

Following our leisurely dinner at the hotel (complete with live music and two gray-haired hula-dancers), we explored the grounds of “Uncle Billy’s Hotel,” which are picturesque and exotic—exactly the Hawaii you’d expect to find in, say the ‘50s. Because the hotel is old and only has been minimally modernized, there’s a feel about the grounds that made me imagine Cuba in the 21st century—few updates and a semblance of the old colonial look. And tropical. As we strolled through the overgrown, fragrant courtyard area, we were overwhelmed by the chirping of what we first took to be an evening bird of some sort. The sound was so loud, I actually wondered aloud if it could be artificially piped in, ala Disney. Nah—not here, not Uncle Billy’s! But because I saw no activity in tree branches, I became obsessively curious about the origin of the sound. As intense as the chirping was, I expected to see fluttering leaves if birds were settling down for the night. But nothing. The trees were completely still, radiating warmth in the early darkness.

The four of us walked carefully, looking upwards mostly, searching for the creatures emitting the incessent chirping. Jane produced a flashlight from her purse and gave it to Mike, who began methodically to search the origins of the sound. He came up with not 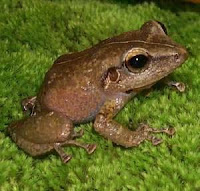 hing for the first few minutes. Then we heard, “Ah hah!” We gathered around Mike who was shining the light under a roofed overhang on an adjunct structure in the hotel garden. A small brown frog appeared a seam in the roofing. “Yes, that’s it, all right,” Mike proclaimed. “A type of tree frog.” He shone his light on the little guy so we could get a good look.

I was awed to think the volume of chirping could be caused by such a small creature—there must have been thousands of them in this garden, alone—and for the next several nights, shook my head in wonderment as I imagined these tiny frogs, about the size of my thumb, carrying on their circadian quest with such intensity.

When I got home and started sorting photos, I needed to identify a few locales in Hawaii. In doing so, I stumbled upon a Web site that contained a reference to an invasive species of frog on the big island, which is causing ecologists and conservations to squawk loudly with their own sound. I clicked on the picture, and there was “our frog.” These Coqui frogs (named for the sound of their chirp, “Ko-kee”) are recently arrived, accidental tourists from Puerto Rico. They have thrived so thoroughly in the Hawaiian islands, particularly on the “big island,” they are endangering indigenous insects and displacing native frogs. So . . . the very thing I thought was wonderful in Hawaii became a monster in Seattle, in the time it took to read two paragraphs.

I got to thinking how ironic it was to discover something that was once enchanting has taken on an evil quality. One minute it’s unadulterated pleasure; the next minute it’s a threatening presence, hazard, forbidden fruit: riding a bike without a helmet, driving a car without a seatbelt, attending a rock concert without ear protection; DDT, cigarettes, hot dogs, amalgam fillings, Gumi Bears, asbestos, dams, bacon, and transplanted Coqui frogs. The list goes on. Until we cross the threshold from innocence to informed consumer or curious citizen, we are free to enjoy the pleasure of the pleasure. And maybe that’s not all bad. We can’t live forever.

As for frogs—their chorus was wonderful. I’m sorry they’re taking over habitat from other creatures in Hawaii, but hearing their song remains implanted in my memory as a magical moment in Hawaii.
at 8:33 AM

Excellent. I give it five ribbits.