Next week, in California, our son is hosting his twenty-third pumpkin carving party. I wrote the following reflection in 2007 after attending the party for the first time. 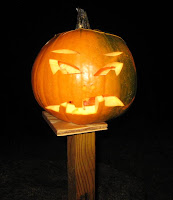 After getting second-hand reports throughout the ‘80s and ‘90s about the annual pumpkin carving parties given by our son, Matt, I could scarcely believe it when Hubby and I actually booked airline tickets to see it for ourselves. Known for many years as Pumpkins-on-Pikes and always staged the weekend before Halloween, the party has grown from a college kid’s get-together in Minnesota to a talk-of-the-town event in New Hampshire that more than a hundred people attend.

Matt has enchanted us over the years with tales of the party’s success and people’s reactions to it. I soak it up, of course, because I am ever thirsty with my mother’s pride. I love hearing success stories as told to me by my children. But nothing ever takes the place of first-hand observation.

In twenty-one prior Pumpkins-on-Pikes, the weather had cooperated with crisp sunny afternoons and moonlit nights. Oh, there was that one year it snowed—memorable for anyone trying to carve a jack-o-lantern while wearing mittens—but otherwise the weather was dependably good. In 2007, though—the year the Seattle parents traveled 3,000 miles to the Franconia home of Matt and his wife, Candra, to see the event for themselves—it rained. It didn’t just drizzle, either. It poured. 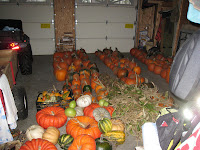 When the skies open up and drench the earth, what do the party hosts do with 150 pumpkins intended for carving outside? Heap them in the garage so the carving tables will fit in, too. Sure, the motorcycle can be edged over a bit, the tandem stood on its end, the cars put up on the road. Where will the hot cider be served when the outdoor tablecloths are blowing away? From the stove, itself, of course! What about the tarp that acts like a sail when the wind whips it up and nearly pulls the railing off the deck? Untie it, take it down, fold it up, and kiss it off. Tarp not provided!

The inside of the house needs some adjustments, too. Roll up the rugs, cover the carpet, set up spotlights, and thank the gods a Porta-Potty was ordered and delivered earlier in the week. Put down towels for foot wiping and make room for piles of wet slickers and boots. Smile. Button up in waterproof jackets, pull on the knee-high Wellingtons, and don fishing-hats. Grin and say repeatedly in cheerful voices, “Maybe it will clear up later,” or “It’s supposed to blow over by nightfall . . ..”

When the rain and winds intensify and the guests start arriving, relax! Nothing to do now but pass the deviled eggs, de-mud the pumpkins in a sudsy washtub in the driveway, set out all the serrated knives and carving tools from the pumpkin bin, and offer to open beers for those with gooey hands. Crowd around the makeshift tables and carve away. As each jack-o-lanterns is finished, load it up with two or three tea-candles and run down the hilly backyard to impale them on pikes. Mud everywhere. A toddler jumps in the puddles forming in the driveway. Laugh. Pass the treat bag to the children, fill the cider cups, and barbecue the pork loin under the garage’s overhang. Pile up those tea lights inside the carved pumpkins, in case the rain lifts. Keep on praying for the rain to stop—can’t light the pumpkins in a downpour. Keep on hoping, just in case.

Candra is busy inside. “There’re towels for your feet . . . set your casserole anywhere there’s a space.” Beslickered Matt tirelessly trudges back and forth from the garage to the woods in the back of the yard with pumpkin guts, which deer and rodents will devour in a day or two. Several of Matt and Candra’s close friends, recruited ahead of time to help, have worn their Macintoshes and Wellingtons, prepared to brave the ferocious storm in the name of friendship. They’ve been to other Pumpkins-on-Pikes where the weather’s been perfect.

And then it happened. A tiny crack in the cloud cover opened up and spread. As light waned and darkness crept into Franconia, slowly, surely, the rain slowed. Clouds began to roll and blow across the sky. The moon struggled to make an appearance—late, like a drunken actor, not at its brightest, or best—but there! Several optimistic guests and their host scurried around the yard with lighter-wands, climbing ladders up to tall pikes and stooping over to reach low pikes. Through varying thicknesses of squash skins, pumpkin faces began to emerge from the darkness, and the magic happened. The very thing I had imagined all those years—pumpkins glowing in deep yellows and oranges—began to appear in the navy-blue night.

Standing at the top of Matt and Candra’s sloping backyard, I felt as though I were a minor deity commanding inanimate objects to come to life. The backyard in Franconia isn’t wired for electricity, so the moonlight leaking through the clouds barely illuminated the pikes. Only the glowing pumpkins themselves were visible. Faces emerged—ugly, cute, clever, scary—and graphic images of spiders, or the words, “Go, Sox” (the World Series was in full swing). Floating images in all sizes, some near, some at the edge of the yard where it meets the woods. Faint outlines of guests rippled among the pikes as they braved the squishy grass and soggy earth to roam this nocturnal illuminated sculpture garden. Everyone was an artist that night.

A nine-year-old who had come to the party with his mother sat at the top of the hill near me and narrated the scene to a large hand-puppet he’d brought along. The puppet answered him back in an animated fashion. “Spooky and wonderful,” they seemed to be saying—“this is what Halloween should always be like.”

I thought about the Druid origins of the holiday and felt a pang of kinship with primitive people in their veneration of light in darkness and creation of effigies to ward off the unfriendly spirits. The darkness, illuminated by glowing pumpkins, was both eerie and unknowable. Our shadows could have been from either world—the physical or metaphysical. A few children raced around with glow-in-the-dark bracelets provided by their hosts. I shivered and came inside. But several times I went back outside to revisit the scene, to press it into my retinas.

Guests finally drifted home. Ninety-five pumpkins glowed on until, one by one, their candles fizzled out. The party was over for another year, but indelibly imprinted in my memory. And in my heart. Seeing Pumpkins-on-Pikes is one of my lifetime highlights.
at 11:19 AM