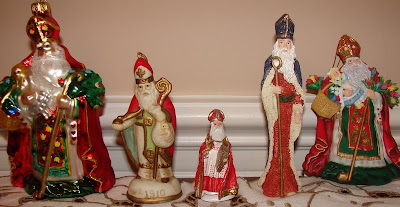 It was December 5, 1972, when my new friend from the neighborhood, Sue Prein, phoned me. After standard fluffy niceties, she asked, “So . . . are you all ready for tomorrow?”

“St. Nicholas Day! What do you mean? Don’t you celebrate St. Nicholas?”

As a matter of fact, our Seattle-based family had never had reason to celebrate St. Nicholas Day. Why, we’d never even thought about it. As far as I was concerned, St. Nicholas was a scrawny old bishop from some place in Turkey who rode a white horse and brought an impoverished family a dowry for its unmarried daughter. I knew there was a tradition of men disguising themselves and knocking on doors in Eastern European countries with gold coins or lumps of coal for children. But in Milwaukee, Wisconsin? How preposterous!

I had a quick lesson in Wisconsin history on the phone. Huge numbers of Polish immigrants had thoroughly integrated their seasonal practices into the new world, and the other large ethnic population there—Germans—had thoroughly embraced the practice. By 1972, practically everyone who lived in greater Milwaukee celebrated it. I wasn’t sure quite what to do, but just to be sure, I went to the corner variety store and bought two dollars’ worth of penny candy.

At 3:00 p.m. the four Glerum children burst through the door, home from school and as bouncy as the jumping beans displayed on the counter of the variety store. “Mom,” one yelled. “Guess who’s coming tonight! St. Nicholas! We have to put our socks out!”

“We can put out our shoes, instead,” chimed in another.” “We’ll get coal if we’re bad and candy if we’re good.” All four scurried upstairs to find suitable foot ware for St. Nick.

“I sure hope I’ve been good enough,” I heard one say and realized this tradition might be a useful one.

When I told Hubby that night what Sue told me, he rolled his eyes. “OK,” he said. “But I guess that means they don’t get to hang stockings on Christmas Eve—what a shame.”

“Oh, no,” I answered. “I asked Sue, and she said all the kids and their kids’ friends hang them up both times.” Hubby just rolled his eyes—consumerism rearing its ugly head. “But it’s leverage,” I reminded him. “And good leverage, too.”

In the morning all four kids at candy for breakfast. Living in a house where candy was rationed, it wasn’t surprising that one of our boys remarked, “Boy, I’m glad we moved to Milwaukee.” The other kids quickly seconded their delight in their newly adopted city.

At school (public, mind you), the crayoned paper-stockings the kids had made with their respective teachers each contained a few gold candy coins, and a candy cane. Not one kid in four classrooms was left a lump of coal! (Yes, I specifically asked each of my children the question.) Hard to believe for me, having helped out in the classrooms a few times in the fall. But I’d leave well enough alone. I, too, was learning to love Milwaukee.