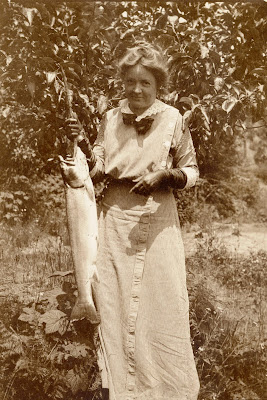 Recently, my cousin was contacted by an artist requesting photographs of our maternal grandparents. It seems he's been commissioned to do a painting to commemorate one hundred years of real estate development in Spokane, Washington. Our grandfather, as one of early real estate men in Spokane, is to be depicted in the painting, along with our beloved grandmother.
My cousin referred the request to my sister, and to make a long story short, Sis and I both began to dig around in our trove of pictures for good ones of our grandparents. Interestingly, my sister and I realized--maybe for the first time--that our grandmother must have been the photographer for her family, judging by how few pictures of her we could find from her wife-and-mother days. Our grandfather had several professional photographs taken, as well as snapshots, but Grandmother's pictures are scarce, indeed. I was ecstatic when I found this picture. That twinkle, that smile . . . I have never forgotten it.
I was five when she died, but I still have vivid memories of her--burned into my psyche by her loving and focused presence when she visited from Spokane. She taught me to knit, to sew, to tie a knot in the end of thread--and listened to me as though I were the most important person in the world.
This picture--of her holding a giant fish she caught on Lake Pend Oreille, Idaho--was probably taken sometime between 1912 and 1915.
at 4:39 PM

Oh I am so glad you sent me to your blog. That is the same picture that one of you sent to me. That is so great that the guy is doing a portrait of each of them. Hope we all will get a photo of the paintings.
Bet you two are having a great time looking for pictures. Take care.And Happy St.Patrick's day.