A little bit of our family history was delivered to the thrift store the other day . . . with the hopes that someone will delight in finding a vintage three-speed Raleigh that needs quite a bit of restoration.  The bike was a big deal in 1974—three gears—and “the biggy” gift to our daughter on her eleventh birthday. She was thrilled and the envy of many of her sixth grade peers because of it.

Over the years its design has become woefully obsolete. By today’s high-tech standards, it’s downright primitive with only three gears.  I tried to “get back in the saddle” with this bike a few years ago, but floundered . . . eventually deciding that either it or I was too old for the project.

Hubby and I agreed it was taking up precious garage space, and our daughter has long since upgraded her bike. Off it went to Value Village where it will become someone’s treasure, we hope—maybe just in time for Christmas. Goodbye, the likelihood that I will ever ride a bike again. (It's OK, really.)
at 8:48 AM No comments:

Grandma, I wrote this poem about the book The Giver*, I thought you would enjoy reading it. If you haven't read The Giver, the poem may not make sense. Love, Maddie

THE GIVER
Memories flashing by
No color seen from eye to eye
One single soul is chosen
To remember the days of the frozen
The mistake of a decade
Leaving everyone afraid
by Maddie, age 10

(*Grandma's note: Dear Blog Reader: It isn't every day I'm willing to give up my platform to share it with another writer. However, the ability of a certain (yes, beloved) ten-year-old to capture the essence of this book warrants sharing this space. The Giver is by Lois Lowry and was published in 1993. Click here to read a synopsis.)
at 7:53 PM No comments:

Labels: granddaughter's poem, poem about 'The Giver', poetry, The Giver 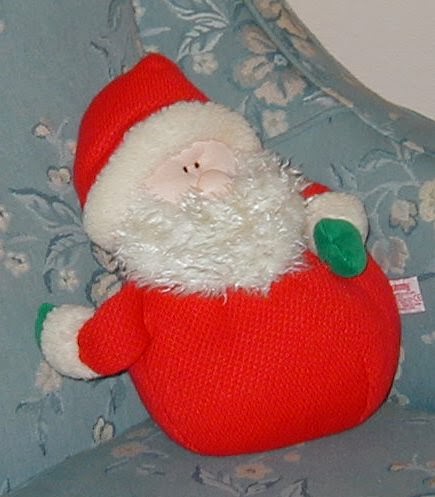 
I don’t have your e-mail address, and you don’t seem to be on any of the social networks, either. I’m hoping you read my blog because I know how backlogged the post office gets this time of year (although it's been doing great, so far).


I’m writing to thank you for everything you do. Year after year, you provide so much pleasure to our weary world. Just think of all the children who talk about you incessantly during the month of December and all the projects you inspire with crayons, stickers, needlepoint and computers. Consider the songs, movies and plays about you—the poetry and secrets. You represent hope for children of all ages and cause careworn adults everywhere to smile and laugh. The world becomes a little gentler, a little softer because of you.

Lately I’ve been worrying about you, though, what with the talk of global warming. It sounds as though you may need to relocate your North Pole operations sometime in the near future. From what I understand, you’d dearly miss the spectacular aurora borealis—especially in these darkest months—but otherwise you might enjoy a warmer climate. After all, you and Mrs. Claus aren’t getting any younger. Imagine how much easier it would be to oversee all that activity if your joints didn’t ache so much and you could soak up some warmth and light from the sun when you sneak outside to puff on your pipe.


Come to think of it, I’m sure many states would offer you a lot of perks (tax breaks, a golden parachute, etc.) for the privilege of having your world renowned enterprise headquartered within their borders. You might even be able to stop contributing to the elves’ pensions and get them set up in 401(k)s if you relocate to a business-friendlier place. I have to say—if a 401(k) is good enough for most of small-to-big corporate business to offer their employees in lieu of pensions, it would be good enough for most of your elves. You could always enact some kind of bonus for the go-getters.


And here’s another idea: Have you thought about going public? After all, most of us already feel as though we are stakeholders—so why not be shareholders? We all benefit from your success. I mean, what if you didn’t show up with the requested gifts on Christmas Eve? A lot of us adults wouldn’t know how to cope if your enterprise didn’t consistently deliver on its promises. In fact, your customer service is outstanding!


Although they’re not strictly 'made in America,' at least the toys built at the North Pole aren’t being built by underage, underpaid and undervalued people in the likes of China or Bangladesh. Surely you pay your elves something better than minimum wage! Did you know that a small town in Washington—Seatac—has just raised its minimum wage to $15/hour? Of course, the voter referendum is being challenged in court, but please pay attention to what’s happening if you want to retain excellent workers.


I’m sorry, Santa, I’m rambling. I intended just to say thanks, but I guess I got a bit carried away. Your annual visit represents possibility to young and old alike. I have been your fan for seventy (at least!) years and my commitment to your cause gets greater every year. You inspire me. Merry Christmas!


Sallie
*Apologies if you notice redundancies from my Christmas-card letter written 2009.
at 4:42 PM No comments: