Lesson of the Stuffed Bear

Once upon a time (OK, it was Christmas of 1984), the oldest son in a family of four siblings was Christmas shopping in Minneapolis. As a sophomore at the University of Minnesota, he was headed home to Milwaukee for the holiday, and hoped to impress his family with gifts purchased at a store unavailable to them in Wisconsin. While at Hudson's Department store, he spied an adorable teddy bear dressed in a bow tie, tweed trousers, and a knitted blue cardigan. No question about it. He snapped it up for his mother who had a teddy bear collection.

The mother's collection had started just a few years earlier when the youngest son in the family purchased a trendy 'pot-bellied' bear in a desperate attempt to buy a memorable gift for his mom, notorious for her "I'd love some note cards" answer to the question of what she wanted for Christmas. When the mother opened the package with the bear, she hugged it immediately, effusing over its cuteness, and named her Deedee. "How do you know it's a girl? asked the giver of the gift. "I just do!" replied the mother.

There was no doubt about the gender of this newest bear, Jules, on account of his being dressed as a boy. Because he was so smartly attired, she promptly dubbed him Jules, because she had just seen Francois Truffaut's 1962 film classic, Jules and Jim, for the first time. Jules remained a kingpin in the collection.

Fast forward several decades, and the bear collection was overtaking needed space. So . . . the mother sadly weeded all but ten, keeping her favorite bears, the ones with strong sentimental value. Jules was one of the ten (yes, of course, Deedee was too), and eventually made his way into the now-deceased Father's office, a room so empty without its thriving business being operated from its confines that the Mother began calling it the Bare Den. When it occurred to the Mother to set out the remains of her bear collection on the empty shelves in the Bare Den, the name of the room morphed into the Bare Bear Den. 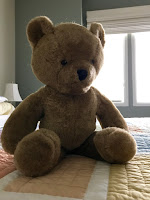 Now it's January 2017 and the Mother has just had surgery. She needs a little pillow to put under her arm to remind her not to fully turn over on that side until healing has taken place. Searching for the right-sized pillow, she enters the Bare Bear Den and picks up Jules. "Ah, maybe you could help me, Jules," she says. She then strips him of his clothing . . . and tucks him under her armpit. Jules turns out to be the perfect size and softness-quotient for the task at hand. Before too many days go by, she begins thinking of Jules as "Baby Bear," a gender-free name reassignment. 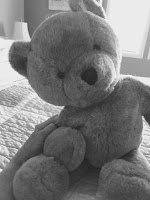 As the months of 2017 tick by, the Mother decides that Baby Bear has a place in her life, filling the need of Listener from time to time (and Baby Bear never talks back, a good thing.) She realizes that she doesn't think of Jules as a male anymore. Without clothing, there is no profiling of gender . . . a Jules could be a Julie and, in fact, is known now simply as "Baby Bear."  And this gives her pause. She doesn't want to be flippant about this matter (a stuffed animal most accurately would be described as gender neutral) because she is deeply understanding and compassionate about issues surrounding transgender people. But she realizes how much of our expectation about behavior and propriety has to do with clothing and its encompassing assumptions. Absence of male clothing has completely negated the assignment of a male name.

Underneath that surface judgement we all make is what doesn't meet the eye--the essence of each being, which really has nothing to do with assignment of sex. Even this dear stuffed animal, now a steady bedtime companion for the Mother (who almost never goes to sleep without tucking it under her arm, even though not required for medicinal healing) can teach us that lesson.She wonders what she would have named the bear if it had arrived without it's handsome outfit. Of course, she'll never know, but she loves Baby Bear for this insight. 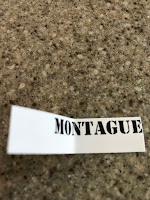 The phrase, “choose your side” has many meanings and ramifications. When I learned yesterday, as an audience member at the outdoor production of Romeo and Juliet staged by Off-Road Shakespeare, that I would be choosing whose family I was rooting for— whose ‘side I was on’— I was surprised and even a little taken aback. Not only have I seen several full blown productions of this classic Shakespeare, but I acted in a University of Washington production of it (more than fifty years ago). When the director passed a hat with folded papers in it, I hoped I’d be a Capulet—biased, of course, by having played the part of Juliet’s nurse. But I pulled a piece of paper with MONTAGUE written on it and was told to gather with other Montague supporters in the wide circle of audience surrounding the players. So I did . . . and I will never regret it. Instead of seeing the world from Juliet's perspective, I got to see it from Romeo's.

During the show, all the scenes at the Capulet household not having Romeo in them were played in another part of Red Square from where the Montague scenes were playing out. That meant I was seeing the play unfold from a bias. Of course, when there were scenes with family and/or friends of both families—we all came together. I didn’t hear a lot of the dialogue most familiar to me, but it made me pay attention in an entirely different way to the play. I’m not sure the hatred between the two families has ever struck me as this pervasive before. The hatred isn’t just about idle teenagers in Verona with raging hormones—it's a hatred rooted in generations of animosity.

What an amazing production it was! The sky was blue; the sun was bright; and the actors had the enormous Red Square at University of Washington for their stage. When Romeo was banished to Mantua, the audience supporting the Montagues followed Romeo along the brick walkway all the way to the picturesque Quadrangle at UW—the equivalent of several blocks—all the while being accompanied by melancholy and haunting guitar music as a guitarist and a box-beating-drummer walked with us.

Guiding the audience was carefully and expertly carried out by banner carriers—crew members of the Off-Road Shakespeare Company—as efficiently as if they were tour guides leading disparate travelers to interesting sights in a city. Various parts of Red Square lent themselves beautifully to the narrative requirements, such as Friar Lawrence’s cell, which was a cranny below a stairway wall. It allowed both Capulet and Montague audience members to lean over to see and hear the conversations between Romeo and the Friar. And the balcony? It was fabulous!

Not only could I hear every word spoken by the competent actors, I was wowed by their dexterity. Most have learned several parts and don’t know which one they’ll play until character parts are drawn from a hat just before the show starts. Gender doesn’t matter; race doesn’t matter; yes, blind casting works! I was utterly enchanted by this amazing and free production.

Of course, being in a public square, lots of people wandered by . . . some stopping, some staying, some asking what was happening. In the latter case, a business card announcing the endeavor was handed by a crew member (usually the family-banner carrier) without breaking character or talking.


At one point a Campus Police van skirted the players . . . and squealing seagulls occasionally did their best to obliterate the Bard’s words . . . but they didn’t. I heard it all and cried at the end. The pitiful tally of corpses at the conclusion of the play had a more devastating effect on me because of where they were--out in the open under a blue sky, additional testimony to the horrific loss of young life all because of hatred and misunderstanding. Choosing sides can be deadly.

But I am glad I chose to go to this particular play, pulled "Montague" from the hat, and had the opportunity to think about a well-worn play differently.
at 3:04 PM 1 comment: