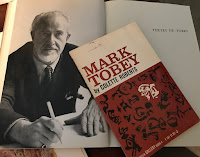 My parents were friends with Mark Tobey, Northwest artist, visionary, and mystic whose work is held in major museums. One evening in 1959 after Tobey had been at our house, I was struck how wise, how deep his thoughts were. (He was approaching seventy—and I nineteen.) As a university freshman, I also felt wise. After all, I'd learned to smoke cigarettes without coughing, hold my own in philosophical conversations, and stay awake half the night cramming for an exam. That particular evening it struck me how amazing it was that such a great and wise guru had been our guest—this extraordinarily talented man sitting in our living-and dining-rooms, chatting away with my family in the same relaxed way an ordinary neighbor might. The difference was that his thoughts were profound, his comments scintillating. I was enthralled by every aspect of the man and wanted to remember his words—immortalize them. As soon as Tobey departed, I began jotting down in a spiral notebook what I could remember of that evening’s conversation.

Four years ago I discovered those notes in an old box stuffed with odds and ends, marked “Treasures.” Multiple sheets of notebook paper were folded in the box, unopened since the very night I recorded them. The notes are of a one-sided conversation only—Tobey’s—as he chatted with my parents. Although my parents provided the other half of the dialogue, Tobey’s musings were all I bothered to capture. After all, he was a great artist, wise beyond others, while my parents were just ordinary people.

What follows in italics is exactly what I wrote at age nineteen—words spoken by Tobey—but I’ve augmented a few words [in brackets] and added several footnotes to help today’s readers make sense of them a half-century later.

Seafair: [1] I just stay away from downtown [when it’s going on]. Miss Universe, Miss Washington, Miss South Dakota, Miss Florida . . . [they] all look alike. Same smile, same crown on their heads. Glamour is substituted for spirit. They have no spirit, so they straighten their teeth, pluck their eyebrows, paint themselves with grease, and there is glamor! They look—like the devil? No. They don’t look like the devil. I’d like to imagine that the devil looks like something!
Sex: One thing about the twentieth century—we’ve discovered sex, and “they” won’t let us forget it. Aren’t we wonderful! We’ve discovered sex! Sex in soup, sex in . . . you name it, but don’t put sex in abstract art! The critics don’t like it.
Fast-paced modern times: I used to like to go into Safeway about dusk. It was nice. Now I go, push a go-cart up the aisle four times—then I ask where the coffee is. All you hear now is ‘ding, ding, ding.’ People hurry. Why, you can’t even get to know your butcher now. Occasionally an arm sticks out [from] behind [the] glass. We do all this so we have time to live. We hurry in and out, but when do we live? We don’t know the butcher. When do we live? Only humans make life—we can get as mechanized as possible, but only humans make life.  White Henry Stuart Building[2] [now has] automatic elevators—music comes on. What for? One street in Hong Kong has more life than the whole of Broadway[3] because it is completely human. Only humans make life.
Young artists cannot grow when snatched up in [their]youth—[I] don’t approve of early discovery of talent. ‘Debutante [now], then wallflower. Now days, [there is] no young, exceptional talent that hasn’t been “discovered.” Scouts all over—too many.
Urban blight: Trees soften the hardness of life—the only thing [that] rests your eyes downtown. [For instance, take the] Pike Street Market[4]—every race, creed, color, culture. Saturday – [I] took five Yale students there. Top part of their trip. Never enough time. So many things to watch, to wonder at. Color of vegetables and fruit seem to put everyone in a good  mood. If you go, take lunch up to second floor—see the whole sound. Beautiful view! Two blocks [away] at second and Pike, what is there? Nothing. Nothing. Not a thing to look at . . . except the trees in the front of the bank.

As a then seventy-four-year-old woman reading the newly rediscovered musings (I'm four years older now), I found myself incredulous. In retrospect, Tobey’s comments seem no more insightful than any other old person’s. Having revered him all these years, I realized the words easily could have been spoken by any one of my own peers, railing about the contemporary scene. Mark Tobey was a mortal, after all, with the same kinds of opinions and notions about the ruination of the younger generations and deterioration of services that we all notice as we age—the “wisdom” of hindsight. He continued to admire Pike Place Market, however, something that is still easy to do, despite its periodic updates and gradual gentrification.

Time changes perspective: a universal truth. That very constancy stitches us together—whether we’re rich or poor, famous or unknown—into a continuum of humanity. And what’s perceived as the decline of civilization continues to be lamented by people on the downward curve of life as they mourn “the good old days.” I still adore the work of Tobey and revere his genius, but now that I’m older than he was when last we met, he seems less a deity to me and more an ordinary mortal who happened to have extraordinary talent.

[1] Seafair is a Seattle month-long summer festival
[2] A Seattle landmark  in the first three-quarters of the 20th century. Sited on Fourth Avenue and University Street, it was torn down in 1974 to make way for the home office of the then Rainier Bank  (once an inverted pyramid design, the building is currently under complete redesign)
[3] A lively commercial street in Seattle’s Capitol Hill district
[4] Currently referred to as Pike Place Market
at 10:58 AM 2 comments: 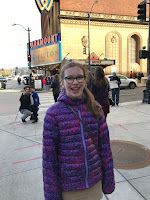 Finally the national tour of Hamilton arrived in Seattle, which was the long anticipated occasion for a visit from my Canadian family.  Eleven-and-a-half year-old granddaughter, Mae, is one of its biggest fans . . . so how could her grandmother not buy tickets for her (and her parents) as a family Christmas gift? 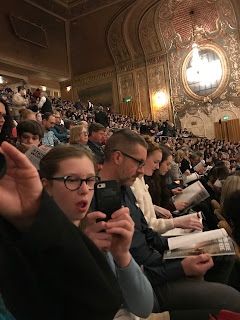 Several days before our performance date (Hamilton plays in Seattle from Feb. 6-March 18), I received an email reminding me I had tickets (as if I could possibly forget!) and informing me there was a free Hamilton App to download on cellphones. When we arrived at the theater, the ticket taker referenced the app (HamiltonBroadway.com/app), as well. Yes, all this seems commercial rather than artful, but it turned out to be a great way to spend time as we waited for the curtain to rise at 1 pm.

To say that Hamilton lived up to our expectations is a considerable understatement. We laughed and cried and clapped and cheered . . . and talked about it into the evening hours, and again the next day. I feel so fortunate to have seen it. Hamilton has the power to take your breath away. But to me, the most powerful and moving thing about it is its colorblind casting--making it heartbreaking in a way that it wouldn't be if the characters were portrayed by all northern-European actors. Hamilton deserves ALL its hype.
at 11:48 AM No comments: