Do clothes make the man memorable?

For years I gave my husband grief about his choice in casual shirts. They looked so similar! There were the blue-and-white tattersall button-downs; the blue-and-white striped oxfords, the blue-and-green tartan flannels. If you set them out in a row and squinted, it was just a blur of blues—light for summer, dark for winter. When we walked through a department store, I'd point out other-color shirts—maroon, olive, purple, crimson—colors he looked great in. Sure, he had a few different shirts, but the majority of them stayed in his preferred color palette and pattern schemes. Even the Hawaiian shirts he purchased over four trips in two decades had the same colors.

Fast forward four years to July 2018. I have just been appointed to help write a Voters’ Pamphlet statement. I will be working on the project with a man I’ve never met, so we set up an appointment with the Fire Chief to discuss the ramifications of replacing two fire stations in our city. I tell him to look for 'old with white hair.' We greet each other at the coffee shop where we’re meeting—shake hands, and get down to business.

The next morning I am out walking on the trail near my home when a passing biker calls out, “Sallie? Hi!” The man turns around and pedals back to where I’ve stopped, and I recognize him underneath his helmet. Yes, it’s the man I’m working with on the Voters’ Pamphlet project. After we chat a minute, I say, “I’m glad you called my name—I rarely recognize even good friends underneath their biking helmets.”

“Oh, it was your shirt I recognized,” he says . . . and grins. As I laughed, I realized this was, indeed the same shirt I’d worn at the meeting the day before. I frequently wear ‘yesterday’s clothes’ for my exercise walk the next morning.

Fast forward to mid-August 2018. By now the man and I are well acquainted, having had a lot of communication over our project. He tells me he has watched a City Council meeting on YouTube, the very meeting during which we were both appointed to our project. He says he saw me in the audience. “Huh? I wasn’t on camera,” I replied.

“Not your face, but your back was . . . and I recognized your shirt,” he said in a matter-of-fact tone. I laughed at this comment, but I could hardly believe it. Was I really wearing the same shirt then, too?  After I hung up the phone, I looked at the YouTube, saw the shot of the audience's back, and realized I was not  wearing the same shirt!  And then this whole topic came full circle. My closet rack has morphed into a monotone color scheme and similar patterns, just like my late husband’s. I may be the only person who thinks I wear a variety of clothing.

Takeaway:  Maybe the saying should be, ‘clothes make the [wo]man easy to remember,' especially if everything looks alike.' 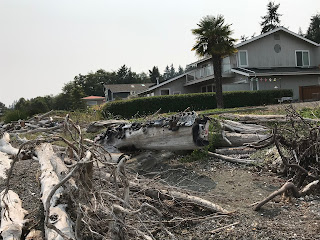 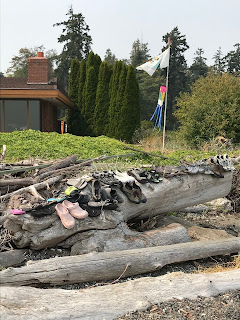 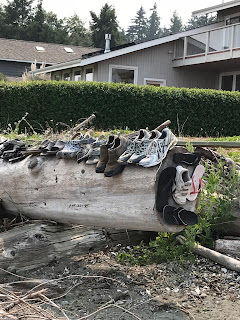 From a distance, it's just a log. Then, as you get closer you realize there are shoes on it. What? so many? And then it abruptly explodes as a  hilarious, delightful permanent  installation. Who did it? Its clever and anonymous creator devised it to the delight of shoreline walkers on the beach near Fay Bainbridge State Park on Bainbridge Island, Washington.

Was it someone in a private residence adjacent to the park? Was it a whimsically minded visitor who had seen so-o-o-o many shoes left behind on the beach? And don't we always leave them on a log when we wade in the calm waters of a summer shoreline? What a treat to enjoy a stranger's legacy of humor memorialized for beach visitors to chuckle over.