Who isn't "In Search of Lost Time"? 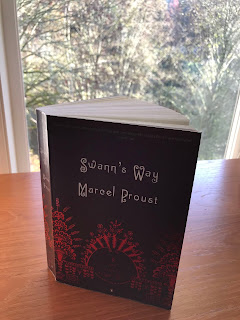 Two months ago I set myself a literary goal to accomplish by the time I am eighty. Granted, I'm nearly four months shy of seventy-nine, so why did I need so much time? Because I've set out to read Marcel Proust's entire work, now known as In Search of Lost Time, not by its older translation, Remembrance of Things Past. Today I reached my first milestone for my goal: I finished Volume 1 (of 7), Swann's Way!

When I decided to push myself to read Proust before my next decade, I wasn't sure my timeline was realistic. Like many people I know, I had tried reading Proust multiple times in the past, rarely getting beyond the first twenty pages before flinging it aside in frustration and annoyance. What a boring, dry, long-winded work, I'd think to myself. But something kept niggling inside me over the years. If it really is the greatest work of fiction written in the twentieth century (as it is frequently called), there must be some way I could make it accessible. And that's when I thought about reading it out loud to myself. Why not! I live alone, and at least I wouldn't fall asleep reading! That turned out to be a fantastic breakthrough.

Reading it aloud has made ALL the difference. Instead of being daunted by Proust infamously lengthy sentences running upwards of a hundred words with minimal punctuation and maximum divergence from the first topic the sentence introduces, I was gripped by them. (See? I can write a long sentence, too.) Reading aloud made sense of the words and let me hear them, the bursts of thought with all the asides and deviations of a manic conversationalist. By the time I was a few dozen pages into Swann's Way, I was weeping from the pure ability of one man to express the inexpressible, to elicit emotions and reactions with thoughts and phrases and words and descriptions that come together to smash open closed places in the reader's own heart, life, psyche. Within a week of my project's undertaking, instead of setting a timer for ten minutes of reading aloud, I just read until I'd absorbed all I could. Sometimes it was only ten minutes; other times almost half-an hour. Occasionally I reverted to silent reading, becoming so swept up in the narrative. 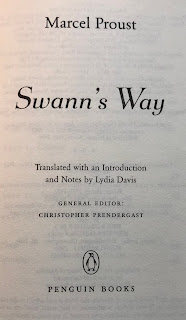 It wasn't the storyline that kept me going. It was Proust's words drilling into my own internal blockages that made this book so memorable. My own experience and memories continued to open and reveal themselves to me. As the fictional narrator's memories explode and pour forth, they resonate on an almost unconscious level. Just when the storyline gets thin . . . so wispy it's hard to grasp, there's another aha moment  that speaks so loudly it literally takes my breath away. It's weepingly wonderful! I am beginning to understand why Proust is so esteemed. No doubt it's partly my own lifelong experience that has let me get to a place where I can let his words in and really hear the truths transmitted through this work. Am I "In Search of Lost Time?" Most definitely, in the Proustian sense. And I'm grateful to be old . . . old enough for Proust.

As soon as I get to the bookstore, I'll get started on Volume II: In the Shadow of Young Girls in Flower. I'm optimistic I will reach my goal by March of 2020. I'm also thankful for the newish translation of all
seven volumes from Penguin Books, which has probably helped me more than I realize.
at 3:16 PM

Labels: In Search of Lost Time, Proust, Remembrance of Things Past., Swann's Way