Farewell, my Macy's and other shops 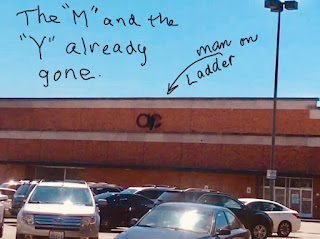 One of Seattle's oldest shopping centers (and the first enclosed mall in the U.S.) is undergoing a redo, which involves closing most all of its inside-facing shops. Macy and J.C. Penney, along with many more stores, have already left the Northgate Shopping Center, and other personal favorites like Nordstrom, the Loft, and Gap will be gone by the end of the month. Northgate is being developed into the Pacific Northwest home of the National Hockey League, complete with a hockey rink and training facility for a team Seattle has yet to procure.

Eventually some of the stores will return with a reduced footprint, small specialty shops will arrive, and housing will become incorporated into the complex. But for the past three months, stores have been disappearing like melting ice. Northgate is now a mere shadow of its illustrious past. And that makes me nostalgic.

When I arrived Monday morning for a quick errand, I was startled to see that the M and Y of Macy had already been removed from the side of the building. Macy's last day was just the Sunday before! When I returned to my car less than half-an-hour later, all traces of the store's name were totally gone, as were the man and the ladder.

The Loft was down to four racks of drastically reduced clothing, and its unclothed mannequins were tagged for sale. Eddie Bauer had two tables by the front door touting 70 percent off last sale price and one solitary clerk who looked lonely and bored to death for lack of bustle.

Looking through Macy's locked doors made me sad. Once a store I complained about--for being so jammed with inventory it was hard to pull an item off the rack--is now a totally empty of merchandise, a ghost store.

I will miss the ease of dashing through a medium-sized mall. Now I will need to visit the local "mega-mall" to shop at Penney's, Macy's and smaller favorites. Just parking there adds ten minutes to the errand. I'll need a half-day just to run little errands (like replacing socks or a colander) that I could have accomplished at Northgate in an hour. I don't mean to glorify the "olden days," but mall shopping sure was easier.
at 10:04 PM