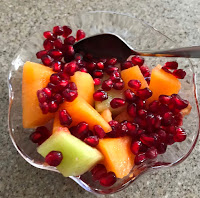 "Poor Persephone!" Whoever would think that to herself, as she dips into a breakfast treat? Maybe some old woman ruminating to herself at her kitchen table? Yes--that's exactly what I was thinking as I began eating this delicious bowl of fruit.

In a rare moment, because I'm really bad at determining when a pomegranate is ripe, I decided to put one in my grocery cart. I was  delighted to find it juicy and tasty when I peeled it. Munching on the elusively flavored, crunchy, bitter-sweet seeds brought back a flood of memories from childhood about  Persephone whose ingestion of a mere six pomegranate seeds forever assured the barren growth period we call winter.

When my father read aloud Nathaniel Hawthorne's Tanglewood Tales to me in early grade school, the Greek myths  were told with Roman names for the gods and heroes. And the stories were definitely simplified and prettified. So Hawthorne's telling of the story involves Proserpina (aka Prosperpine) who's kidnapped into the underworld by its king, Pluto (Hades in Greek myth) because he yearns for a pretty, young companion. Of course, since the story was adapted for children,

Hawthorne entirely skips what most of us know of the myth--that Hades kidnapped Persephone, raped her, and kept her imprisoned in his kingdom, the underworld, until she was rescued by her mother Demeter (aka Ceres in the Roman version) and the god, Mercury (aka Quicksilver in Rome).

But because she'd eaten a mere six pomegranate seeds, she'd be required to return yearly to Hades, and Demeter, goddess of the earth's fertility, would grieve until she returned. I loved this story as a child and considered Persephone truly amazing for holding out half a year before she ate the tiny seeds. 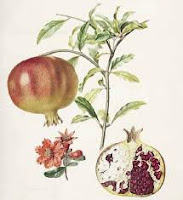 A simplistic summary of a complex myth isn't my point, however. I'll digress enough to mention I was lucky enough to study Greek mythology in college and thereby learned the harsh version of this and many other stories that minced no words for misdeeds and demons. But I've never forgotten the my first exposure to the story as a child in the 1940s, hearing it from the perspective of what was OK for children to hear almost 100 years earlier when Hawthorne re-imagined it.

What's interesting to me is how seventy years after hearing the story, it came back to me with every crunchy pomegranate seed I ate from that bowl recently. This post is just a long way of saying that stories remain in our heads a long time--sometimes forever. So much of what we retain is connected to storytelling in some form or other. In fact, stories reign!
at 6:33 PM