I'm Sorry . . . an unusual note from one usually silent

For more than nine years, I was spoiled rotten by a wonderful paper carrier. I subscribe to two papers--one local, one national--that are delivered together. The paper route is served by car. The carrier would park her car and scurry between four or five townhouses at my end of the street, tossing papers into the walkways/driveways leading up to our front doors.

In my case, she actually would toss it all the way onto my porch. Part of this fabulous service was because the parking spot she used for my end of our street is directly in front of my door. And part of it, I believe, was because every few months I'd leave her a thank you note, a little bag of wrapped candy, and a small, extra gratuity. (I always tack one on to the newspaper invoice.)  I know she appreciated this, because every now and then I'd open the door just as she was getting in, or out, of her car. When that happened, she would rush to me with a hug and a smiling thank you. Indeed, I felt a bit like royalty compared to my neighbors who had to walk a ways to collect their newspapers.

But all good things come to an end. My trusty carrier retired--an event announced via email from the Seattle Times, with a plea to be patient with the new carrier because learning a route takes time. I would have known there was a new carrier without an email, because beginning in February, my paper began being delivered curbside, not to my porch. A neighbor who is up earlier than I told me the new carrier was just driving slowly while tossing papers out the window. For the first time since living in my current home, I was walking the length of my walkway on cold, dark, and sometimes rainy mornings in my pjs and slippers like everyone else in the neighborhood! Welcome to the real world, huh. But I couldn't complain about it--no one is entitled to special treatment. I'd just become spoiled. 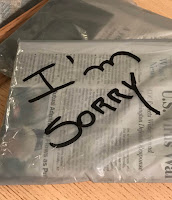 But then--yesterday I only received one paper. I looked behind bushes and even under the porch for it. And while I'm happy to overlook an occasional oversight, the cost of daily newspapers has increased considerably over the last couple of years. For that reason, I decided to report the oversight, knowing I would get a one-day credit on my bill. This morning I opened my door with my coat on, ready to trek out to the curb. Not only were today's two papers delivered to my doorstep, but this message was facing me when I opened my front door. I've never received an apology for an overlooked delivery of anything before. Wow! I'm intrigued and impressed. What will tomorrow bring? I'm guessing my new carrier is wondering the same. I think we may be starting a good chapter in our provider-consumer relationship.
at 6:13 PM No comments: