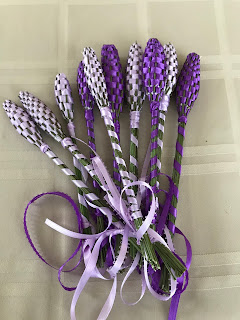 I have a wonderful source of beautiful and fragrant lavendar every year. My sister and her husband grow an abundant crop in their Seattle home's front yard and always invite me to harvest as much as I want.  For the past few years, I've dried the equivalent of a few cups of flowers, which I then stuff into little organza bags and bequeathe to friends and family at Christmastime. This year I created Lavender Sticks, also, something I haven't done for years.

I learned to make them as a teenager when my dad gleefully pointed out an article in periodical that I think was called The Herb Growers' Magazine. He was a hobby gardner and loved herbs in general, but he was partial to the scent of lavender and wore Yardly aftershave, which had a predominantly lavender scent. He didn't do crafts himself, but could elicit sachet-making activity by announcing that his abundantly fragrant crop of lavendar in a given year was ready for harvesting. At least one of the three women who lived in his household would rise to the occasion. When I first saw the photo of lavender sticks in the magazine and realized making them meant weaving stems of fresh lavender through ribbons, the challenge was on! They were so satisifying to create and I loved making them, happily giving them to my mother to use as tuck-in gifts for her friends. (None of my friends wanted a lavender stick for Christmas!)
Multiple years later, I made once or twice when my children were small and the lavendar plants were still thriving at my mother's home, but when she moved the source disappeared. And lavender doesn't winter well in Wisconsin, so after we moved there in 1972, there was no way to source the main ingredient. But even though I've been living back in Washington for the past thirty-four years, I have  made sachets only by bagging loose blossoms, no sticks . . . until this year.
I'm not sure what triggered my decision in August, as I harvested an abundant crop at my sister's, to try making 'just one,' but I got carried away and made more than twenty-five! They have to be woven within hours of picking so that the stems are flexible enough to weave. And because the sticks always smell best when they are newly made (unlike traditional blossom sachets that can be squeezed for renewed fragrance), most of the twenty-five have already found homes. Only a few will be Christmas gifts this year. But weaving them was a satisfying activity (and a tad compulsive, too, as I tried to weave each one better than the last one), so I'm looking forward to another season of lavender sticks next year. God willing.

P.S.  Part II of the article carries more photos. The host of my website, blogger.com, has made radical changes to the way its users create posts, siting 'new, easier' technology. Easier for someone, not doubt, but not for me. Seems that placing pictures with wrap-around text is impossible. It's not just that I'm a bit handicapped in terms of technology, either--I've been on help sites where I find lots of rants by other users of blogger with the same disappointed rsponse. I think my posts will probably be limited to one photo each from this point forward (until blogger.com fixes something).