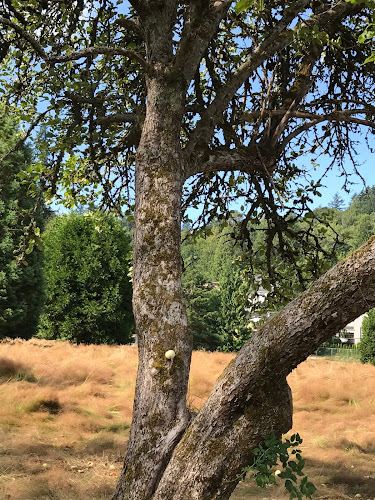 Walking in a local park where an orchard was planted in the 1930s, I had to laugh. There are a few straggler trees remaining, and this time of year the apples drop to the ground. The apple in the photo didn't fall far from the tree--it was lodged in a little crevice in the tree-- so the picture becomes a graphic illustration of the cliche. And that made me think of something that happened a couple of weeks ago. I was at my local Farmers Market, masked up, wearing a hat, carrying several cloth bags loaded up with produce. From behind me a voice called out, "Sallie?" I turned to see a friendly looking woman hurrying toward me, her arms filled with two flats of blueberries. It took me a minute to recognize who was behind the mask, but I did--just as she identified herself as L. "I was pretty sure that was you. I recognized you by your walk." What a flood of memories that brought back. My mother was easy to recognize by her how she walked, and as soon as L. said that, the expression, 'The apple doesn't fall far from the tree,' jumped into my head. I remembered lying in my hospital bed after the birth of my first child more than fifty-six years ago (in the days when a new mom rested up from the ordeal of childbirth for a full three days before returning home) and listening to footsteps in the corridor. I heard my mother approaching from a long way away, recognizing her by the sound of the her footsteps, the same ones I heard every morning as a child. Because my bedroom was over the kitchen, I woke up every school day morning to hear her stepping to and from the fridge, the stove, the table, as she made the family's breakfast. CLICK, click, CLICK. click. She favored one foot more than the other, just I apparently do.

And since we're on the topic opf like-mother-like-daughter, there's a request that seemed silly to me when she made it while in her early sixties: "When I'm old and feeble-minded," she said, "promise me you'll pluck my chin hairs when you come visit me in the nursing home." I think of my mother whenever I stand in front of my mirror with my tweezers in hand. She didn't live long enough to need someone to help tweeze chin hairs, and maybe I won't need the service, either . . .  but her comment always makes me smile in solidarity.  Yup, THIS apple didn't fall far from the tree.  Maybe that's one good thing about our COVID lifestyle. No one can see what's growing under the mask.
at 6:01 PM