Rarely have I been so moved 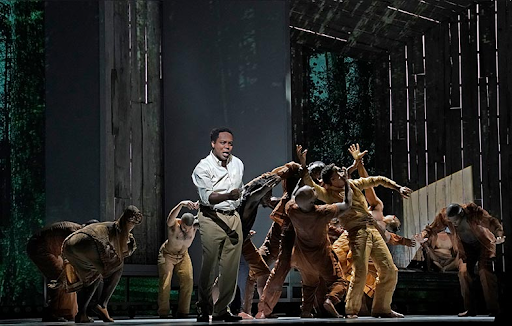 It seems somewhat pointless to rave about a stage production that has come and gone, but I have to write a few words about the most recent Metropolitan Opera's Live HD performance this past Saturday of Fire Shut Up in My Bones by Terence Blanchard. Although you cannot get a ticket for it any longer on stage, you could catch the encore production of the live-stream offering when it's offered in cinemas tomorrow, Wednesday, October 27. Eventually, it will be made available again via streaming, and because the production totally sold out at the Met (unusual for that to happen), perhaps it will be available sooner rather than later. For more information, click Take me to The Met

Why would anyone seek out an opera with such a grim and horrifying plot line as sexual molestation of a seven-year-old boy and how it affects his next thirteen years?  Until you see the opera, don't even try to answer that question. The title is taken from the Book of Jeremiah and is a fitting metaphor for the effect that his older cousin's behavior had on young Char'es-Baby. The work is simply magnificent--so beautifully constructed and cutting so deep, I doubt if anyone could see it without being moved to tears. But then realize it's written by a black composer, a black librettist, based on the memoir written by a black man--which makes a lot of 'firsts' for an opera company that's an icon of productions of classic works written by white males over multiple centuries. I was blown away by this history-making production and trust it will be the first of many operas not about the black experience, but of and from the black experience.