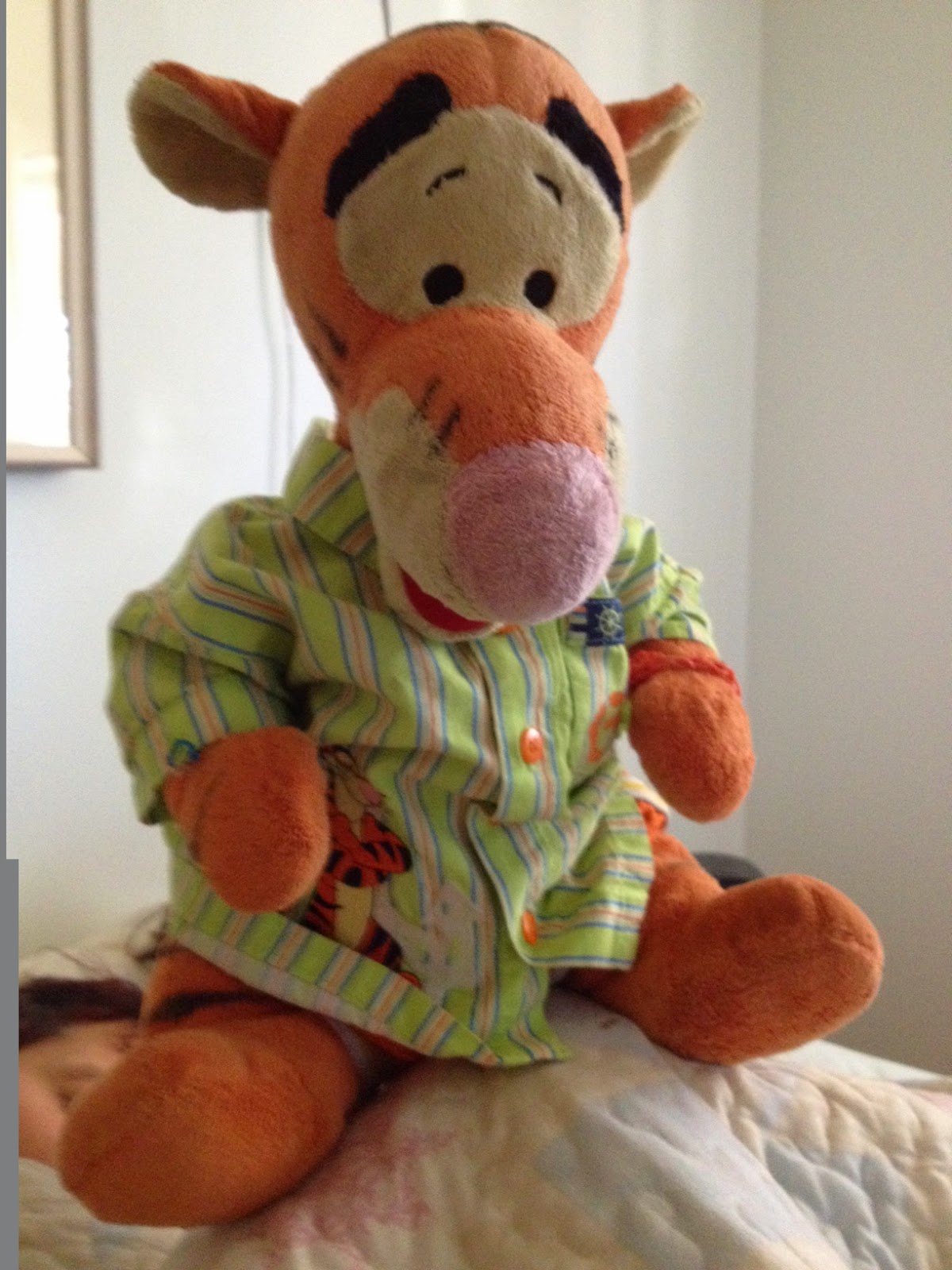 Granddaughter Mae has always loved stuffed animals and now—at age eight—has such a huge collection it’s hard to imagine she could make room for yet another, but she always can. As she acquires each new “stuffy,” an older one takes a backseat in the toy box, but on any given day there are the favored few who travel with her, share her bed, and have honored places in the table, her backpack and her day-to-day thoughts.

A large stuffed “Tigger” (Disney version) was given to her when she was just a baby, and he has maintained a certain status for the duration. Although he rarely ranks as “Number One stuffy,” he hasn’t been relegated to the bottom of the pile, ever. He has the dignity accorded to a senior citizen, in no small part because of the role he played in bridging the gap between a little girl and an old man grandfather. In this case, a grandpa who had all but forgotten how to talk to little children by the time he was sixty-six years old and she was born.

Once Tigger was on the scene, Mae’s grandfather would hold Tigger and move him around, all the while talking in a gruff “Tigger voice” to Mae. Mae would respond, as if talking to Tigger (not Gramps), and frequently the comments Tigger made caused her to get the giggles. By the time she was four, Tigger was a staple in visits to our house—and when Jay and I visited Mae’s house, Tigger was waiting in the doorway with his owner. Tigger was a kind of interpreter for Mae and Gramps—allowing two distinct generations to find common ground.

When Jay had cancer surgery last summer, Tigger made a video to be viewed remotely in his hospital room. Tigger addressed Gramps solo, (his “operator” lying below the camera lens so she couldn’t be seen). Tigger spoke with the gruff  Tigger voice that Gramps had bequeathed him, telling him how sorry he was to hear about Gramps—a wise old stuffy consoling a wise old man. No wonder Mae wrote this as the first line of a poem she composed after learning about Jay’s death:
Gramps is Tigger
He’s a mustache, too.

He’s a dolphin that
splashes with his tail.

He’s a wizard
behind the curtain.

But I’m missing
the most important:
He’s my grandpa.

Five weeks after Jay died, we celebrated his life with a party in his honor. Naturally, the entire family was here—many of them sleeping at my house. When everyone had gone, I walked into Jay’s office where Mae and her parents had been camped while they were here. This is what I saw, a note from Tigger himself: 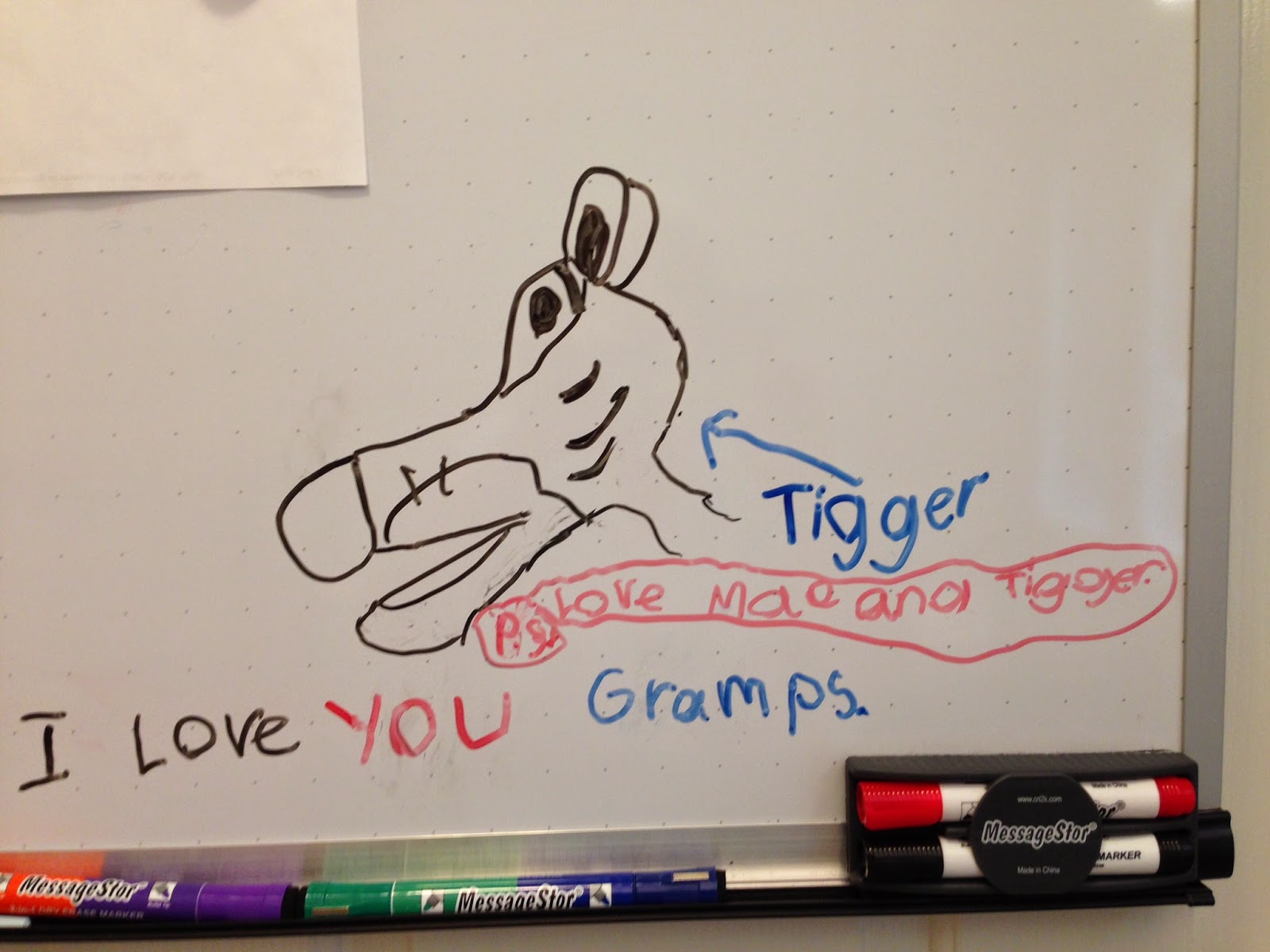 I can’t erase it—not yet. Tigger is Gramps, just as Gramps was Tigger.
at 5:12 PM No comments:

And I Will Ever Hope

AND I WILL EVER HOPE

The  light will be as
dazzling and beautiful as
a Cascades’ sunrise.

flowing inside mourning hearts.
I and the others still
will be in the night,

and you—my love—
will be in the
morning light.

Then the mourning light
will be diffused
and the sadness

will be shuttered
and the razzle-dazzle sunlight
will be blinding.

I, behind you,
will feel sorrow,
missing you and envious

of those who greet you now.
And I will ever hope for