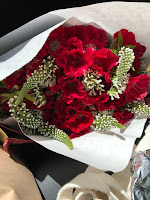 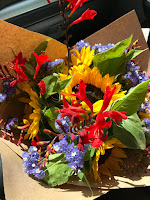 I've written a lot over the years about how much I love the farmers market in Lake Forest Park. Just twelve minutes away on a Sunday morning, it's my chronic Sunday destination regardless of other activities I've scheduled. This year I've only missed two Sundays since it opened on Mothers' Day--both absences were days I was out of town. 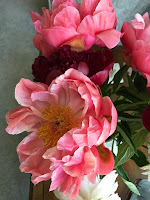 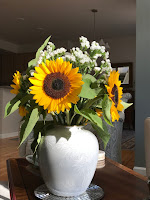 Regular readers of this blog know my penchant for the typewriter poet, but I have lots of favorite vendors with always-dependable produce. Every week for years I've purchased fresh flowers from the same stand, rarely spending more than $10 and always being delighted. Now I'm just looking at some of the photos I've taken over the past few months, thinking about how much I'll miss having locally grown color on my coffee table when the market closes for the season on October 20--just three more weeks. There is nothing like the spectacular variety of bountiful nature, and a gifted grower to bring joy to this old woman. Yeah, I'll start buying color-spots from the grocery store, but it's not the same.

One of my all-time favorite works of art owned by the Milwaukee  Art Museum is a lifelike sculpture called Janitor by Duane Hanson (1925-1996). Janitor was a favorite work of everyone in our family, especially our children. Acquired in 1973 by MAM, we always made sure we looked for the piece whenever we visited the museum during the fourteen years we lived in Wisconsin.

The first glimpse of Janitor is startling. The sight of a museum (or any) employee standing around, obviously doing nothing, makes a person uncomfortable--or maybe even giggle. Does that man's boss know he's slacking off? Only when you get close do you realize this is an exceptionally realistic sculpture and not a real person. You also realize Janitor depicts a man who is not liking his day very much, most likely fatigued--maybe even depressed--wondering how long until he can punch-out on the time clock. Over the years we lived in the Milwaukee area, we had many visits to the museum and inevitably one of us would sidle up (as close as the guards would allow) to Janitor for doing nothing, or maybe pretend to be just as tired as he seems to be.

When Jay and I last visited Milwaukee together in 2013, a visit to the MAM was a priority for both of us because it has a fantastic collection of modern works, among them Kandinsky (one of Jay's favorites), my favorite 19th century angel painting (by Abbott Handerson Thayer), and an amazing collection of modern and German Expressionist works. When we saw Janitor, Jay couldn't resist; he imitated the statue's pose. I know I have more than one photo of Jay similarly imitating Janitor, but I could only easily locate this one.

Last week I visited Milwaukee alone--my first time since becoming a widow in 2014--and headed to the museum for an afternoon of luxuriating in front of some of my favorite artworks. When I rounded a corner at the museum, I had to cover my mouth so as not to sob aloud. There he was--Janitor--leaning against the wall. Of course, there was no way to know Jay would never be at this museum with me again when I took his photo in 2013, but the realization that Janitor was still holding up his wall, and Jay wasn't holding up anything anymore, nearly undid me for a few minutes.
It's good we don't know when the last time for any activity is, or we'd be so frozen in our own angst. Maybe we'd feel exactly how Duane Hanson's Janitor looks.
at 3:46 PM 1 comment: