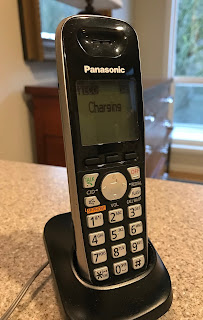 Yes, I'm old fashioned; I still have a landline with several extensions. There was a time when the handsets were all connected to a phoneline, so if the electrical power went out, they still worked. Well, that technology disappeared and now my landline ceases working like everything else when the power fails. Still, they are reliable instruments that ring loudly in their respective rooms (the kitchen, the bedroom, the basement, etc.) and robotically announce who's calling.
My most common caller nowadays is someone announced as Anna Nimmus. What a nuisance she is; she calls me at least four times a day. If I block her number, she uses another one. Wow--what a deep pocket she must have to afford all those phone lines. If I read her ID on the handset's screen, she spells her name Anonymous. But the robot announces her as Anna Nimmus. I ignore calls from Anna, despite how badly she wants to reach me, and hope she'll give up trying to get in touch. Wishful thinking, of course.
The way telephones work and are used is but a tiny example of the enormous amount of change I've lived through as an eighty-year-old. When I was young, my family had one clunky rotary-dial phone--and it was a big day when we got an extension on the second floor of our house. We were some of the lucky ones because we had our own line, not a two-party line we shared with another household. Some of my friends' families had those two-party lines. When making an outgoing call, you picked up the receiver and listened before dialing because the line might be in use by someone from the other household sharing it. Lots of jokes were made about secretly listening to another's call that way, and even books were written with this sneakily invasive method of finding out someone else's business (a murder, perhaps!) as a plot point. Families whose budgets were stretched to the max could opt for a four-party phone line, as well. With a four-party line, you'd hear another household's phone ring at your house, but the ring pattern would be different. You only answered it when it was your ring.  Clearly, in the 1940s and early '50s a private line was a luxury that not everyone could afford, and some families had no phone of their own, but used their neighbors' for emergencies.
Fast forward through push button, cordless, etc., all the ensuing modernizations of the family phone. In cities, shared phone lines were phased out by the end of the '50s and several extensions could be found in a typical middle-class home. Now let's visit my grown-woman (wife and mother) household in the late '70s. A family of six that included four teenagers, one phone line and two extensions.  One handset was on a table in the upstairs hallway. One handset was a wall-mount in the kitchen. The phone upstairs had the longest cord allowed, a spiraled cord in the same matching green as the handset. The user could have a semblance of privacy by carrying the phone into his/her bedroom and shutting the door. If you shared a bedroom, however, it was hard to keep out the occupant, so the cord also reached into the bathroom, running under a door that could be locked.
It seemed as if there were always others waiting to use the phone, make their plans, gossip with their friends, check homework with their schoolmates, call their girlfriends. Even the parents might need to check in with their friends or neighbors or appointments. One of the most effective and definitely the most annoying ways of getting to use the busy family phone was to lift the receiver of the extension not in use and interrupt the current conversation. If a sibling did so, it could start a furious fight. If a parent did so, it contaminated cordial communication for a period (lasting from minutes to hours).
Recently my youngest son told his seventeen-year-old daughter about having to take turns to use the phone to call his friends in the evening, and how, if the friend's mother answered the phone, etiquette dictated a short, polite conversation with the mother before asking if his friend was home. My granddaughter was incredulous. It was akin to our parents telling us they walked three miles through the snow to school. "You WHAT? OMG, Dad! Really?"
I love my cell phone, how I can text someone, "Can you have a quick chat now?" before calling. What a great way to cut wasting time chatting with someone's mother first. Not that my friends have mothers anymore . . . but I still love my cell. I don't have to ask if I'm catching my friends at a good time. My cell phone counts my steps, serves as a timer and alarm, acts as my photo album and camera, records conversations, holds my library book, becomes my flashlight and magnifying glass, and serves as the best encyclopedia ever imagined. And speaking of encyclopedias, remember the door-to-door salesmen? Don't get me started.
at 1:53 PM No comments: 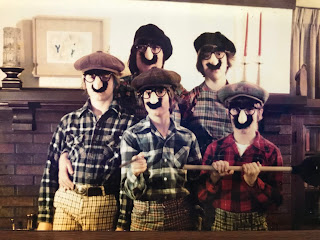 Although the quality of this photo is poor, it remains one of my favorite family pictures. For years I kept it on my desk in corporate America as a way of announcing that yes, I had a family, but details would stay compartmentalized. Of course, the photo always prompted sideways glances or outright questions. And I would answer: Yes, I am the tallest one in the photo, and, Yes, the other four are my offspring. See a family resemblance? Meet the McDraggals.

The McDraggals came about in 1977 to help a friend and volunteer mom who was in charge of the annual grade school talent show where three of my children were pupils. That year, The Gong Show was a huge TV hit, and that gave my friend an idea. She wanted to model the talent show that year on it. Her thought was that instead of the usual polite applause for the multiple degrees of talent and non-talent the audience usually endured, audience members would instead be encouraged to boo so the gong would ring! But, so as not to hurt children's feelings, she had a plan (one that needed and received approval of the principal of the school). She would privately arrange to have kids from each grade (with full disclosure to their parents) intentionally create awful acts that would be booed instantaneously, thus getting the gong within a half-minute. (She even planted several relatives in the audience to assure that happen). The judges presiding over the gong would be PTA moms, full of compassion and would manage outcomes so no one would be sad or insulted. She approached me and asked if a member of my family would like to invent an awful talent act. With kids in third, fifth, and sixth grades in the school, she was fairly certain one of them would rise to the challenge.

Like most families, we watched The Gong Show every week, and the idea was immediately appealing. It didn’t take long to think up the perfect act. The whole family would be needed, however, to make it work. We would play our fake bagpipes! Dad had a tech rehearsal the very same night as the talent show, however, so he couldn't (sadly . . . wink wink) participate.

And what are 'fake bagpipes'? you might be thinking. The six of us together loved to replicate the sound of bagpipes by pinching our noses and humming the classic tune, Scotland the Brave, with a deliberately nasal tone while concurrently striking the outside edge of the other hand across our Adams apples. This is not a healthy action in terms of the vocal cords and no one should do this for very long, but the sound eerily resembles bagpipes and is still hilarious to whomever hears it.

And as the kids became more inspired about developing an instantly gong-able act, we came up with the idea of everyone wearing mixed tartans and plaids, the more clashing the better! There were plenty of hats on the closet shelf (some having belonged to two deceased grandfathers), and a quick trip to the local variety store would provide more Groucho Marx glasses with mustachioed noses like the one already in the dress up box. Voila! The McDraggals were born.

The third grader was eager to take part, but not sure he wanted to be a bagpiper. Instead, he happily conducted the group with a plumber's friend as his baton, adding another dimension of silliness. The eighth grader was tickled to return to her alma mater for this silly event, and my participation gave everyone the scapegoat they needed, in case people later made fun of them (Mom MADE us do it).

Of course, nothing ever turns out quite the way one imagines it. Instead being booed and gonged within seconds, as we expected to be, the audience began to giggle and laugh and roar and applaud and call out "more, more," as we struggled to make it through repeated choruses of the tune. No one gonged us! Eventually the Master of Ceremonies urged the audience to boo, and the gong finally sounded.

In my memory, at least, The McDraggals was one of the most original and fun acts of the evening for the audience, but the immediate reactions by four of the five of the McDraggals, however, was mortification. If you've agreed to make a fool out of yourself for a few seconds, it's not fun to be kept onstage for what was probably two minutes (and, indeed, those two minutes felt like fifteen). It took a few years before we, as a family, could laugh about the experience. Now it’s always fun to remember. And we've been known to hum/play Scotland the Brave on our fake bagpipes as recently as a few years ago.