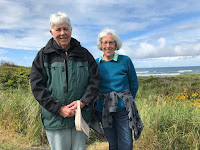 A recent road trip to Westport, Washington, with my long-time friend, Lucy, brought back memories and plenty of nostalgia. There's too much to say in a short post, so I'll start with sights and sounds and smells. 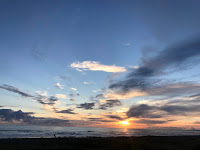 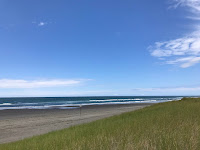 Colors: Certain colors are so specific to locale, such as the yellow of blooming Scotch broom in and about the dunes. Yes, I know it's an invasive plant and I should detest it, but I can't help loving the way it looks in contrast to the prevailing beach grass and pine.

Likewise, the purple of wild lupine scattered among the tall hay-colored grass reminds me of children peeking out from behind curtains--imagining they aren't seen by anyone. Golden and pink highlights accent rolling clouds as the sun sinks low in the sky. And then there's the biggest expanse of blue I've seen in years! Something about standing on the beach without skyscrapers (even three-story apartment buildings) or tall trees delivers a message about our human insignificance that becomes freeing. Nowhere else on earth can provide such a breathtaking glimpse of sky as an undeveloped ocean shore. 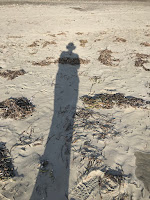 Sounds: The ocean's steady roar (maybe closer to a loud hum in summertime) is a sound I'd all but forgotten . . . until I heard it again. The foghorn (far away on buoys) is the oboe of an orchestra, periodically tuning up the instruments for the concert--gulls, other birdsong, and the steady din of waves breaking.

Smells: The sea. The salt. The seaweed. The wind (light but always there for those three days of June) makes it impossible to escape the pure ambrosia of locale-specific scents. 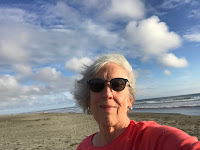 Only at the extreme western edge of a continent can the shadows get this long. And for me, the shadows also were mental and emotional--recollections of many visits to this beloved spot.

Lucy and I both agreed that this visit couldn't have been better, even if it had been (we wished) longer.
at 1:43 PM 1 comment:

If you look it up in the dictionary, the word means a number of things, all bad.

Lately when I hear the word or say the word, I feel happy. Contented. Fulfilled. Hm-m-m. What's that about!

It was a secret while her parents and I discussed it. Then we agreed we could make it work (school in Canada goes till the end of June). 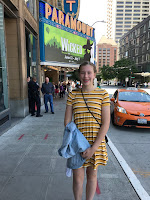 Then it was a birthday gift announced over the long-distance phone call. The call was pretty spectacular, if I do say so. 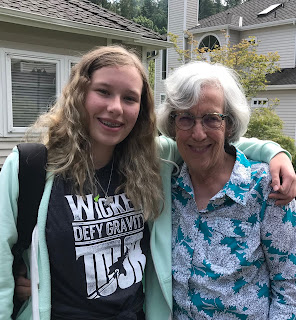 Then there was a month of eager anticipation on both sides of the border. And, finally, it happened!

Her mom brought her to Seattle; she and I went to the national tour of Wicked; and everything we felt afterwards was anything but the meaning of word.