As Busy as a Beaver 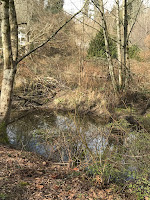 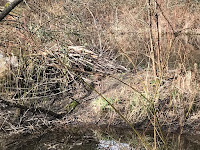 The photos don't do it justice, but imagine  how hard the beavers had to work to build this new home for themselves! A neighbor asked me if I'd noticed the large beaver lodge while walking on our nearby Sammamish River Trail. I hadn't--it's oddly (and purposefully, I'm certain) camouflaged to minimize intruders. And since I've noticed it, I'm aware of how few bikers, runners, and walkers appear to take note of it as they pass it. We are seeing the back-end of the home overlooking a small backwater of the Sammamish river that flows on the far side of the lodge (in these photos). So much activity occurs that we humans are barely aware of, but it's thrilling when we see evidence like this.
at 11:31 AM No comments:

You had to be there. Really. However, I'm hoping you can get the tiniest taste of what it was like to be sitting in a park with your firstborn who has arranged, in conjunction with three siblings who dwell elsewhere, to meet Mom to celebrate her socially distanced (and socially deprived) eighty-first birthday. The weather was cooperating, but we occupied the picnic shelter anyway, just three of us: my first-born, a mutual friend who'd just returned to the area after many months away, and me. A fire was built in the shelter fireplace over my protest ("We don't really need a fire, do we?"). The response was resounding ("Yes! It will be cheerier with a fire"). Dinner was unpacked from a favorite eatery . . . and then . . . and then . . . the sound! A bagpipe's drone. Immediately, my body straightened up. "I hear a bagpipe!" A man known as "Seattle's Bagpiper," had just arrived at Blyth Park at 5:00 on March 8 and he was marching toward us. He was there for me!

The poem, "81," is by the instigator of this amazing event, my firstborn, and sent to me via text today. Even as I typed Tig's poem into this post, I started weeping all over again. Weeping with joy and magic and disbelief. I've always loved bagpipes. "Seattle's Bagpiper" playing for me for a generous half-hour was MY GIFT. It could not have been a more heavenly birthday, sitting outside with sky and trees, children in the park playing, in the company of my firstborn, a dear friend, and my bagpiper .