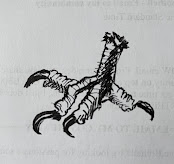 The prompt for my bimonthly poetry group that meets in two weeks is: "If you were a bird, what would you be?"

It only took me ten seconds to know the bird, but what to write about it had me stumped. To me, a true poem wrenches something from within that hasn't necessarily ever been articulated before. Not only does it convey something to others, but it helps identify within something that maybe hasn't ever been considered or realized by the person who creates the work.

So while I knew the bird, I didn't know how to write the poem. Until Thanksgiving morning. Something triggered the phrase, "snooping is my cup-o-tea," and I began to write. Often when I write a poem I revise and revise. This one, not so much. In fact, I changed only a couple of words. Only occasionally do I write silly poems, but that's the compelling reason to share it. Smile away, please. The verses spilled out; the rhymes flowed; it pretty wrote itself. Enjoy!

Helping, oh, how I adore it
And snooping is my cup-o-tea
Nothing is more fun than teasing
Except for counting . . . beyond just 3.
Finding treats upon the streets
Bumping friends up in the air
Yowling, calling, chatting, brawling
My mama taught me how to share.
I love crowds and I love herds
Safety comes in lotsa ways
Loud sometimes, sneaky others
My life is filled with raucous days.
But nighttime is the best there is
Scuffle, shuffle, trade jokes and tease
We laugh and chat comparing notes
Then settle into night with ease.
You think I’m evil scavenging
Berate me for my taste in food
But shame on you for all your scorn
My cleaning up does lotsa good.
We get movies made about us
We get stories written, too,
Yeah, we are a part of Poe-land
Ravens are our cousins, too.
So flap away your nasty thoughts
Caw your blessings when we flock
Murder may be how we gather
But never, never, do us mock.

Today I'm sharing something I've been doing lately that makes me happy. It seems a bit in keeping with Thanksgiving, as well. Basically, it's how I acknowledge random people I'm thankful for.

Today's episode is what triggered this post. I had occasion to shop at a grocery store I'd never been in before. I thought it would be easy because I needed just three things: butter, whipping cream, and a ready-to-bake pie crust. Yes, you know the reason. I'm going to be the (butterscotch--yummy) pie maker for Thanksgiving.

I made my way to the dairy wall, but could not find whipping cream in the section where logically I thought it would be. After looking for what was probably one minute (but felt like five), I stopped a young man who'd burst his way through the 'back room' double doors with a cart loaded with produce. First he pointed to the shelf, then scurried ahead of me to the area . . . and noticed himself there didn't seem to be whipping cream in the case. Excusing himself, he returned to the 'back room' to ask, and reappeared a couple minutes later to help me again. We had both been looking for the wrong thing. Seems there were no cartons this year, just tiny plastic bottles instead, an incognito look for whipping cream.

After thanking him for his help, I rounded the corner to get butter, but then became stymied at where to find the pie-crust. The same young man was unloading his cart in the next area over, and I apologetically interrupted him again. He smiled and marched over to the area--within sight of where I was standing.

"What is your name?" I asked. "Dante," he replied. "Well, Dante, if you don't mind, I'm going to find your manager and tell him how helpful you are." Do I need to say that he broke out in a wide, melting smile? The manager was at lunch, so I called when I got home and left a message for him. The person who answered was smiling through the phone and sounded upbeat and happy at the reason for the call.

Last week I did the same thing for a man at a nearby hospital where my sister was having surgery. Her husband and I were having a tough time finding her status on the board where patients are listed by initials and medical case-numbers only. An incredibly gracious man, Paul, solved our problem. I called his manager the next day to commend Paul as an employee who went out of his way to help people. Even though Paul's job was to assist from behind the 'Surgical Information Desk,' I saw him came out from behind his desk repeatedly whenever he noticed someone in any state of confusion regarding the information published on the status board. When I asked him for his manager's name in order to commend his diligence, he couldn't stop smiling.

I am making a point of letting the people know who help me just how much I appreciate them by telling their manager-boss. Even though simple a 'thank you' is appreciated, to have a boss hear about an employee can make a difference. I can recall from my own manager days how happy I was when a customer made the effort to tell me one of my employees had gone above and beyond. Once at a grocery store when I asked to speak to the manager, I learned that the employee I had commended had been on probation because of some less-than-skillful ways he interacted with customers. The manager told me it meant more to him than I'd ever know because it meant his extensive coaching of the employee was successful.

I hope I will never take for granted receiving help in its many forms. It is so easy to take a minute to tell a 'higher-up' about a good interaction. I hope everyone will try it.