Don't 'leaf it' to others 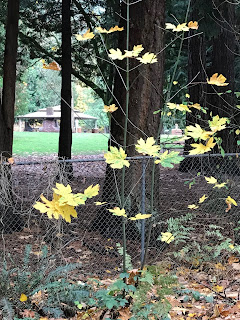 My walk was so pretty recently, I couldn't help but grab the trusty cell-phone camera.  As I passed by the grove of cedar trees and saw the fledgling Big Leaf Maple tree with its few remaining leaves, I was struck by how the tiny tree had giant leaves, and the giant tree had the smallest  leaves--needles. 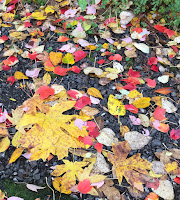 Maybe that's a lesson for humans. The size of the impact--whether it's action-based or visual--isn't commenserate with the height, weight, age, or education of the person. It isn't how loud you shout because you can make a huge difference with a quiet voice . . . but you do need to exercise it.

Looking around on a sunny day 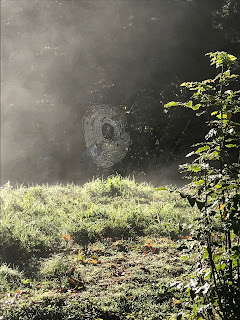 In the autumn it's fairly easy to see evidence of insect and arachnid activity, such as the lovely web (slightly the worse for wear, but still functional) that practically shouted at me on my morning walk recently. Because of our beautiful, sunny days and cool nights that we've been having in the Seattle area, the morning's condensing mist tends to highlight the intricate work done by spiders. 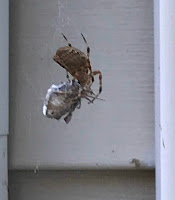 An amazing sight was right by my garage today when I drove in. I've been watching this particular spider for several weeks because she dives behind the garage door molding each time I activate the garage door opener. It's clear she's greatly disrupted whenever I use my car. But today she was too busy binding up her latest ensnarement--an insect as big, if not bigger, than she is--to even be phased by my car passing close-by. 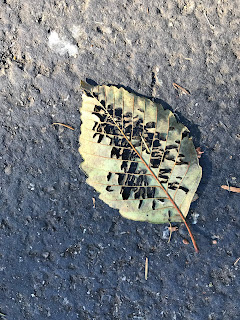 Last, but not least, is a leaf I saw on the ground, which caused me to do a double take. Some insect had eaten it in such as way as to make me to wonder if it might hold a hidden message from an alien. Maybe if I spent enough time, I'd be able to decode a wise phrase (maybe even a complete sentence), or a formula holding the answer to some big scientific mystery.

At first, there seems to be a resistance.


Sometime soon, the hostess will turn out the lights and go to bed.