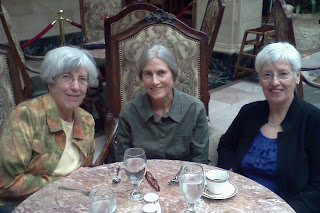 I squinted, my eyes fatigued from relentless roving between all three entrances into the hotel lobby. Allowing my eyelids to droop and shut for a moment, I found myself hoping feigned sleep would hasten her arrival. My childish superstition proved true because when I opened my eyes, a smiling old woman was looking down at me.
“Liz?” I struggled free of the huge puffy sofa to stand and realized that, standing, I was towering over her. “Liz, is that you? Yes, of course it is!” I felt foolish and silly and happy all at once. Putting my arms out to hug her, I curtailed my impulse to embrace too hard, lest I crush her in my excitement.
There we were, first cousins ages seventy-one and sixty-nine, meeting for the first time as adults. We had last seen each other when we were thirteen and eleven. Within moments we were joined by my sister, Judy, who had taken a short walk around the block—her way of alleviating the anticipatory stress we were both feeling as we waited for Liz’s arrival.
“Here’s Judy now,” I said unnecessarily to Liz, who certainly could figure out the woman greeting her was her other cousin. Funny, the way a squeeze around the shoulders can cause liquid to escape from the eyes.
Not only did we live a thousand miles apart as children, but our parents who were brother and sister ( Liz’s father and Judy’s and my mother) were estranged during much of our young adult years—cutting off all communication (which, in those days meant letter writing). When first cousins rarely see each other as children, it is difficult to develop or sustain a relationship as teens and young adults.  It felt impossible to instigate a link as we embarked on divergent paths.
How does one close a gap that spans weddings and children, career development and divorces? A gap that includes uprooting and settling down, achievements and conquests, sorrow and heartbreak?
Surprisingly, it was easy.  For the first two hours, we talked about the one thing we had indisputably in common, our grandparents—the two people we all referred to as “Grandmother and Grandfather,” never Gramps, Grandma, Nana or Pops.  Liz had brought pictures to our meeting, a 9x12 envelope chock full of old photographs, which she fanned across the round table like a deck of faded Tarot cards. One by one, Judy (who was sitting in the middle) picked each one up, with Liz and me leaning over to pore over images—all of us talking at once.
“I have no idea who that is. . . but, look! There's your dad!”
“This one’s Uncle Billy . . . and this must be little Bill . . . oh, and could that be Allene?”
“. . . I know who this is—it’s the first William Neill, the one who looks like Colonel Sanders . . . oh, and there’s Grandfather’s brother, the one who died young . . ..”
On and on we chattered until the ice was broken, until the clock hands circled twice, until we realized how hungry we were and strolled to the restaurant at the other end of the hotel lobby. Only after we ordered our meals did we change the subject; over sandwiches shared our current situations with each other. Afterwards, when we asked the waiter to take our picture, he assumed we were old friends catching up.
A serendipitous event had precipitated our meeting in Spokane. Grandfather Elmendorf founded The Spokane Association of Realtors in 1911, which was celebrating its Centennial with great festivity. The organization had commissioned a painting, a book, and a DVD commemorating its achievements. Not only would Grandfather’s contributions be prominently featured in the book and DVD, but the painting depicted him and our grandmother, and would permanently reside in the board room of the association. We, the granddaughters, had been invited to view the finished works.
Judy and I traveled from Seattle to Spokane and made it a celebratory event for us, as well. We booked ourselves into the luxurious historic hotel that was built during our grandfather’s reign as real estate kingpin. She and I were feted at the office of the association's headquarters as if we were royalty. Our pictures were taken, and we were reminded repeatedly of our grandfather's foresight in founding the organization.
Liz accepted our suggestion of getting together in the shadow of our illustrious Spokane ancestor and drove from her home in Northern Idaho to spend a few hours with us at the hotel. She was unable to join us when we visited the Association’s headquarters the day before, but we were thrilled when she decided she could get away from her home fires for a short time.
As we walked Liz to her parking garage, we all promised to keep in touch with the fervor of Olympic Games teammates taking home the gold. We don’t know what the next step will be, but we all agreed there will be a next step. And that—after having no cousin contact for almost sixty years—feels momentous.
“I realized this was an opportunity being handed to me,” said Liz. “It wasn’t going to come knocking again.” Our farewell hugs were not tentative; they were heartfelt.
at 5:34 PM 1 comment:

Little Miss Stewart (as in Martha) 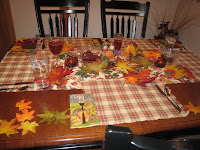 The idea of celebrating Canadian Thanksgiving (October 10) with our Canadian family inspired us to meet our B.C. family somewhere halfway between our two houses. We chose Winthrop, Washington, where we found a dandy condo to rent for the weekend, and proceeded to discuss how we would actually celebrate the event. 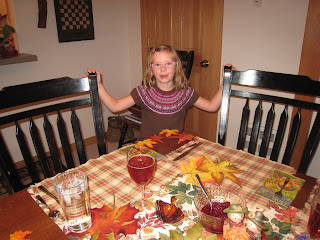 Turkey? Nah, it could be difficult to cook in a kitchen with unknown attributes. Hot dogs? One of us thought that was a great suggestion, but certain adults nixed it. We decided on chicken, and concocted a plan wherein we would purchase an already roasted chicken in Winthrop (e.g. the kind the supermarkets set out under heat lamps) and put together all the ‘trimmings’ as we could muster easily. 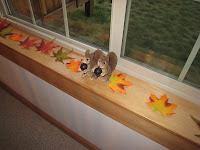 Here is our ridiculously simple final menu put together in less than forty-five minutes: Supermarket chicken, stuffing (stovetop), green-bean casserole (canned beans, etc.), mashed potatoes (from organic Wash. farm), yams (baked in the microwave, sliced, then smothered in marshmallows leftover from an overabundance of sumores’ ingredients), cranberry sauce (my mother's recipe) and pumpkin pie made from “scratch” by our son who even started with a fresh pumpkin!


The table was set by Little Miss “Martha” Mae. She did a beautiful job of transforming the ordinary condo table into a Thanksgiving table, and decided to include the windowsill in the decor. To quote my daughter-in-law after we’d finished the dishes, “That was the easiest Thanksgiving dinner with the least amount of stress I can ever remember.”

I couldn’t have said it better myself. 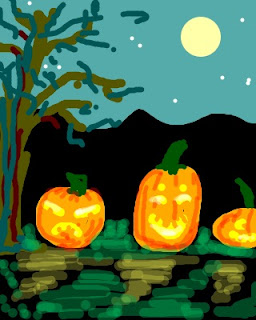 I am having a terrible time learning Windows 7 and Office 10.
I used to think I was computer savvy, but it seems my opinion of my computer skills was inflated. Turns out, I don't know "diddly squat" about these matters. And, to make matters worse (here's my rant about Microsoft--never thought I'd sink so low), there doesn't appear to be easy help anywhere to be found inside the software or even online. In previous Word versions, one only had to tap the question-mark button to find help on whatever was  needed. Now Word refers the frustrated user to a chat room, bulletin board or a forum for help. I have spent hours (so it seems, anyway) roaming various sites for help--just to set tabs easily, or fill a cell with a standard pastel color. The most recent subject of my fury is my inability to set up a couple of macros. I'm ready to have Windows XP reloaded on my laptop, and to re-purchase the old, trusted versions of Microsoft Office--then drop Word 10 AND Excel AND all the rest off the pedestrian trestle bridge near my house.
To get my mind off all this, I've been doodling on the iPad. Here's an example of what I've been doing, thanks to Steve Jobs--R.I.P.
at 8:26 PM 2 comments: