Hubby and I have lived almost a year in Bothell, Washington. Before moving to Bothell, approximately five miles north of the Seattle City Limits, it could be said I was a Bothell snob.

In my mind, Bothell was a Seattle suburb by default, caused by the GREAT BIG IMPORTANT CITY of SEATTLE crawling right up to its edges. But how wrong I turned out to be. Bothell is a progressive, smart, forward-looking little city--holding its ground and taking a stance. Take a look at this article appearing in the Seattle Times today.

For the record, we say Bahth' ul (accent on the first syllable)--not Bah thul' the way the United Airlines' employee in India pronounced it yesterday on the phone. Yes, it rhymes with the word it looks like, minus the 'r.' Some years ago, there was a sign at the city limits with the slogan, "Welcome to Bothell for a day or a lifetime." We used to yuk it up when we'd see the sign. And now . . . uh, we're quite probably lifers.

But wow--we're excited to be part of a little city that knows where it's going! I'm proud to be a Bothellite. Our home on the Sammamish River is within walking distance of the development outlined in the article. Lucky us.
at 4:25 PM No comments:

The eyes have it

Are you old enough to remember the expression, “My eye!,” from the ‘40s and ‘50s?  Instead of exclaiming, “You liar!” or “I doubt that very much!,” we sputtered, “My eye!” It was a polite way of indicating disbelief.
“I wrestled with a wild tiger today,” a fourth grader might boast on the playground. “A wild tiger? My eye!” could easily be the retort.
Handling disbelief sixty years ago was noticeably different from the way we handle it now. Ladylike behavior was valued above all—to the point, sometimes, of absurdity. Today, of course, the response on the lips of a ten-year-old could easily be unprintable.
However, this post is not about archaic slang. It’s just that I’ve been thinking about that expression because of my eyes. For a span of ten weeks, I have not had the right prescription in my eyeglasses, so my eyes have been straining. Faltering. Stinging. A source of annoyance. I have muttered the plural form of “My eye!” probably a hundred times in the last two-and-a-half months, which is what made me think of that archaic slang in the first place.
But now—finally—after ocular implants (two, a month apart), plus the mandated four weeks of healing after the second surgery, I have the right correction in my glasses. After ten optically fuzzy weeks, I can clearly see my book, my newspaper, the view out my window, and my computer’s monitor. I can also see dust and cobwebs and rings around the bathtub. (Notice the lack of the personal pronoun in the last sentence. At our house, those things belong to everyone.)
I feel very lucky to have been able to obtain crystal clear implants and updated prescription for eyeglasses, thanks to Medicare and a nest egg earmarked for such expenses.
“Write about your cataract surgery, and you’ll pick up 1,000 blog readers,” says the jester.
The writer retorts, “My eye!”
at 3:21 PM No comments:

For many years, Hubby and I received our medical care from a wise and wonderful physician. Then, four years ago, he realized he wasn't getting any younger and still had dreams to accomplish. He announced his retirement. The HMO where he'd practiced for many years, Group Health Cooperative, threw a farewell party for him. All his patients were invited to bid him farewell at a modest, daytime reception in the clinic where he worked.  Easily a hundred-fifty people showed up to wish him well. Not a few tears were shed, either. He was a remarkable doctor.

William Affolter, M.D. stood before his beloved patients and delivered a speech he'd written for the occasion. Reflections, he called it. I can't remember a lot of it, but something he said was so straightforward in its simplicity, I am unable to forget it.

"Good health has three main components," he said. "Good genes, good luck, and good choices. You can't control the first two, but you can control the last . . . things like sunscreen and seat belts and diet, not smoking, health screenings, exercise . . . these pay off. "

I've shared this observation with a lot of friends over the years. A surprising number of people are taken aback by the idea that they're not entirely in charge of their own good health. But when they think about it, they see the light. Ah, yes . . . genes and luck.

If we do what we can to make healthy choices, we've done everything we can. The roles of luck (sometimes very bad, indeed) and genes (sometimes greatly lacking) will play out in time. Only choices--one third of the equation--can be managed by us.
at 9:43 PM 2 comments:

I have gone on record with my less than my less than positive feelings about the holiday of Mother's Day.
But I love being remembered by my offspring.  Any day is Mother's Day when that happens.
at 2:06 PM No comments:

Imagine our surprise yesterday when we woke up to the sound of a rooster crowing. We live in a managed community, after all . . . one in which animals are expected to be on leash and flora isn't supposed to run wild. NO skateboarding, EVER!

The voice we heard yesterday belonged to a huge rooster that apparently has wandered away from his cronies upriver about a mile. (Years ago, someone set a flock of chickens loose in a park the riverbank, which has been there ever since.)

Some years are good for chickens (no coyotes) and some not so good (big, hungry coyotes). This year is a not-so-good one; we've seen only roosters and no hens. It seems that our uninvited visitor, "Red," is on a chicken hunt, himself.

Last night he bedded down for the night in a bush at the foot our our driveway. I hope to get a picture of him strutting around the property before the Homeowners Association chases him off (or cooks him up for Sunday dinner).
at 4:21 PM 1 comment: 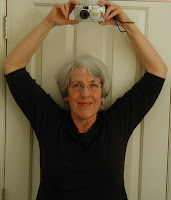 As promised in my last post, today I planned on updating my photograph on the blog. To that end, I conducted my own photo shoot this morning.

However, formatting the new photo on my blog's header was another matter. All the giggles that bubbled up during the ten-minute session (being one's own photographer is a silly activity) turned into grumbling and mumbling during a twenty-five minute session on the computer, as I struggled to replace the old photo with the new one. Bottom line? I couldn't do it!

Nowhere could I find the little encapsulated portrait on the blog's guts to remove it. So . . .I added the new picture farther down the page. At some point, I'll get the hang of Blogspot's "upgrades," but not today. It's too sunny outside to be held hostage by a computer.

Meanwhile, I thought I'd reveal my methodology with this picture.
at 12:13 PM 3 comments: