This mom couldn't be prouder!

Team Such a Blast came in second overall in the race of originally sixty-eight competing boats, a mix of single and double kayaks and canoes, and large voyageur canoes. Thirteen boats (at this count) were unable to finish the 444 miles for various reasons, which must be heartbreaking for those individuals (not to mention their cheering families).
﻿

State-of-the-art technology, allowing transponders on each boat to broadcast a signal every ten-to-fifteen minutes, let this Ma and Pa in the comfort of their Bothell townhouse track the race around the clock that was happening in the far reaches of the Yukon. Whew! It was exhausting forty-two hours and forty-five minutes for us vicarious victors.

As I told someone today, if I weren't his mother, I would never have even met my son, M. Our paths would never have had an occasion to cross--with him, the Uber-athelete and me, the old couch potato.

So I have to say, I'm impressed even to know him, let alone be his mother!

Check out this link Race to the Midnight Sun to see the progress of M.'s six-man voyageur canoe in the world's longest annual canoe race (444 miles), which started at noon today, Wednesday, June 27.

Running with the current on the Yukon River, the course begins at Whitehorse, Yukon Territory, and ends in Dawson City.

After a stressful week, including five days with my arm in a sling (acute tendonitis in the rotator cuff), Hubby and I traveled  to that special town in British Columbia wherein reside three of our favorite people. 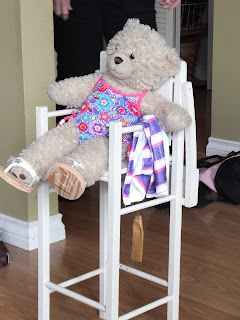 
The ostensible reason was to celebrate a sixth birthday, but the resulting change of focus turned our visit into soul-balm. What could be more delightful than entering a world where a teddy bear named Gabrielle overlooks the safety of about thirty fellow ‘stuffies’ (from a seventy-year old doll's highchair formerly belonging to me) as they swim in an imaginary community pool in the living room. Each part of the pool, from the diving board, the kiddy area, the sauna and the hot tub, was outlined on the living room rug with Hula-hoops and other creative treatments. Talk about diversity! In this pool, pigs, monkeys, dogs, bears, and even a chipmunk all enjoyed each other’s company.


Add to that a tap-dance recital, a soccer match, a final swimming lesson . . . and these old folks returned to their condo in the ‘states’ with lower blood pressure and uninvited smiles still popping up whenever a recollection of the weekend sets in.