That term doesn't mean what you might think. If you’re imagining middle-school aged students making fun of each other, their teachers, or their curricula—you’re wrong! 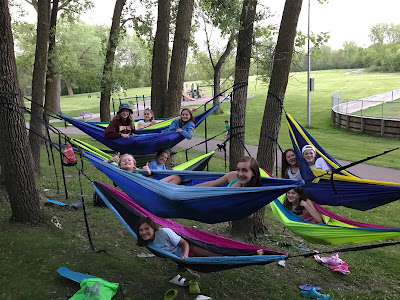 When a young teenage living in Greater Minneapolis says to her mother, “I’m going mocking with friends,” the mother is probably going to smile. She might ask, “Where,” but she doesn’t have to know more.

Mock is short for hammock, and probably should be spelled ‘mock. Take a look at friends of one of my granddaughters in a park near the home of my son and his family. Doesn’t this look fun?  Mentally, just contemplating this scene, I’m settling in for breeze as I snuggle down comfortably—breeze, as in ‘shooting the . . .’ and what happens when gently rocking between trees.

I understand that the thrill of mocking fades once the mocker is obtains a driver’s license. But when you’re fourteen, that’s a long way off and mocking is NOW.
at 1:54 PM No comments: 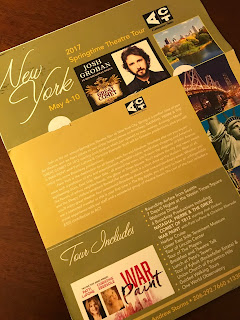 My recent trip to NYC was gratifying, to put it mildly. I’d received a flyer about the excursion in January, but because of health concerns knew I couldn’t commit to something five months out. The flyer was sent out through the auspices of ACT Theatre in Seattle and advertised four Broadway plays, several theatrically oriented tours, and visits to several tourist attractions I hadn’t seen, such as the 911 Museum and the Lower Eastside Tenement Museum. It sounded perfect, but I tossed away the brochure and told myself I’d look for a similar trip next year.
Then in April I received an email from ACT telling me there were still a few spots available for this year. The timing was perfect—I was feeling optimistic about a healthy future and my body-parts that frequently slow me down, such as my knees and feet, were feeling pretty darn good, too. On impulse I called the number on the brochure and within the hour, I’d signed up for the trip.
Not without some trepidation, I will admit. Age can be a stickler in a group where others are younger or more agile. I worried that I’d be exhausted by the time I’d done all the activities included. But something much more troubling lay underneath my concern—one so personal and egotistical, I was embarrassed to share it. As the widow of Jay Glerum, this would be my first trip to NYC in which I wasn’t riding on his coattails. Indeed, I had only to take my husband’s arm to be instantly an insider in the theatre district . . . the wife of a man whom stagehands revered, a man who was routinely invited backstage so stage crews could show off  their expertise to ‘the man who wrote the book.” The thought of going to Broadway shows as an ordinary audience member—not one who got to see the stuff and meet the people that made the shows so spectacular—made me sad. I’d be a nobody in the audience, when only a few years before I’d been a ‘somebody’ just because of my marriage.
To my delight, the tour was wonderful!  I loved my six days in the city and successfully overrode sentimental memories about being there without Jay. I got up early every morning to roam the West 40s, marveling at the hustle and bustle of commuters amidst the stumbling gawkiness of tourists like me who were taking pictures, watching Good Morning America through the street-level windows, sipping Starbucks, or munching bagels, as we all walked through Times Square and its environs.
On the last morning before breakfast I walked back to my hotel along West 43rd  between Seventh and Eighth Avenues, passing the Lyric Theatre where I noticed its stage door was wide open. I peered in as I walked by, then paused and turned around and approached the entrance to the stage. I could see multiple stagehands loading out equipment. One hand stood by the door. “Can I just watch a minute?” I asked.
“Yup, look all you like. But  you can’t come in.”
“Oh, I only want to look,” I responded, feeling a surge of nostalgia. After a minute, I couldn’t resist and asked, “Does the name Jay Glerum mean anything to you? I’m his widow.”
“Nah.”
Immediately another stagehand appeared. "Jay Glerum? JAY O. GLERUM? Yeah, it does—it means a lot!” then chided the man standing at the door. “You do too know that name!” he scolded. “Jay O. Glerum wrote the book! He wrote Stage Rigging Handbook!”
“Oh, yeah . . .  I shouda known . . . I have that book,” said the first stagehand seeming somewhat embarrassed, while the other one extended his hand to me for a firm and enthusiastic handshake. “Jay was great—GREAT—he taught me in two classes. I’ll never forget him!”
We chatted for a couple of minutes, and even though I was invited inside, I declined. The spark of recognition for Jay and his work was like frosting on the cake for me. I felt immeasurably happy as I headed back to the hotel to finish packing for the trip home later that day. And I felt emancipated from what had been my crippling concern. I wasn’t in New York without Jay; he is there—backstage with stagehands who are maybe just a little more careful because of his legacy. I could almost feel him walking beside me.