Five years ago in late October, I was just a couple of weeks into an eight-week grief support group affiliated with my husband's home-hospice provider. I'd enrolled in the support group at the suggestion of my one-and-only second cousin, Allene. I have to confess, I was dubious that I could find much consolation in sharing my grief with a group of strangers, but based on Allene's gentle urging, I tried it.

Looking back, I could not be more grateful. Those eight weeks of meeting with other people also suffering from the loss of a loved one, and facilitated by a social worker, were immensely helpful. Instead of putting on the 'stiff upper lip' that we imagine our family and friends want to see, we could "let it all hang out" with people we didn't know who, likewise, were members of 'the club no one wants to belong to," widowhood.

The first session of eight weeks would eventually come to be called Grief 101 by its participants. Why? After moving through the eight week program of thoughtfully planned agendas, attendees had the option of moving into a continuation of support that met monthly (also facilitated by a social worker), but more loosely structured. Some Grief 101 attendees chose to go their separate ways; I chose to continue with the monthly group,.affectionately known as Grief 201.

That group of widows and widowers, most of whom had then been alone for six months to a year, had developed a real coherence. I immediately sensed their comfort with each other and basked in such collegial support . . . discovering how freeing it was not to have to explain loneliness, desolation, or anger. They'd also learned how laughter among grieving people can feel downright redemptive when commentary or a shared anecdote triggered giggles and guffaws  Not only can everyone in the room resonate with shared pain and tribulation, but we could share a burst of silliness--often on a topic an outsider might frown over. Grief 201 proved to be a lifeline that continued through my second year of widowhood.

But with any support endeavor, a time comes when participation doesn't feel as essential as it once did. Other interests and agendas begin to surge ahead of the need to share bereavement experiences. The individuals participating in Grief 201 collectively became emboldened by several years of support and with the blessings of our facilitating social worker, disbanded. Yet the friendships that had developed between us were deep and lasting. So, with the inspiration of humor and good will, the members of Grief 201 formed a potluck group affectionately known as Good Grief, Potluck!

Initially, the potluck group met frequently. Now we've morphed into getting together just a few times a year. There is still a lot of laughter and deep camaraderie. Several members have found new significant others, but there is still a thick rope that connects us, so we never have a problem finding topics to talk about over the yummy midday feast. Sometimes we might not even say the word 'death.' Other times, we dwell on it and the conversation churns up recollections of feelings and anecdotes. Whatever we talk about, shared experience is at the heart of it.

I will always be grateful to my cousin for her suggestion and the gratifying friendships formed on the basis of a devastating event. Good Grief, Potluck! might also be called, Good Grief, Friendship!
at 12:45 PM 1 comment:

Dashing through the rain 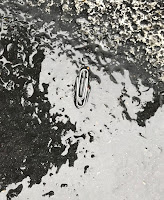 I generally don't look straight down when I'm walking to my car after a class for Active Older Adults at my local YMCA. I'm much more apt to be chatting with a fellow exerciser as we depart to continue our days engaged in myriad endeavors.

Yesterday, however, as I headed out, the skies darkened and opened up--a dramatic cloudburst drenched the parking lot. I held my jacket over my head in a feeble attempt to keep my glasses dry, and dashed through the parking lot trying to avoid the biggest puddles. Then what to my wondering eyes did I see . . . 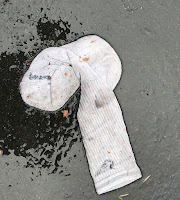 ONE PAPERCLIP. Who takes paperwork to the Y? Maybe some business person who had spent lunch hour exercising was sorting out a briefcase to cram for "the big meeting" after lunch. Or maybe someone interviewing for a volunteer coaching position is organizing her resume.

ONE SOCK. How did it get there? Probably it was inside a shoe that was being hastily stuffed into a backpack. Or possibly it's a real runaway, not the kind that just hides out in the dryer. 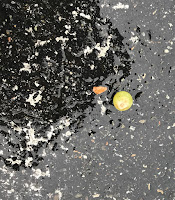 ONE GRAPE.  Why just one on the tarmac? It's probable that it was part of the promised snack a mom offered to her child for being such a good girl/boy in the supervised play zone (while she worked out). As the single grape drops, the mom admonishes, "Leave it!," and there it sits.

Yes, I couldn't help myself. I reached for my phone in the pouring down rain to snap these pictures. Yes, my glasses got wet, but in a weird way, these three items sum up why I like going to the Y: All ages, all reasons, and something for everyone.