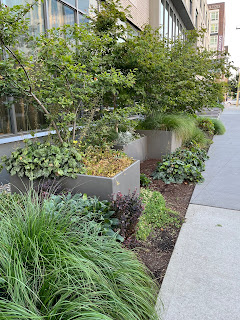 In contrast to my suburban-trail walks with no curbs, few trip hazards, and lots of birdsong, I'm now learning a new morning walk routine. These photos were taken alongside my new place and down the street where a deluxe apartment high-rise is under construction. Yes, lots of sirens and traffic, cement and barriers, but even in the big city, morning brings a certain amount of calm and peace as it begins to rouse to blue sky and sunlight. 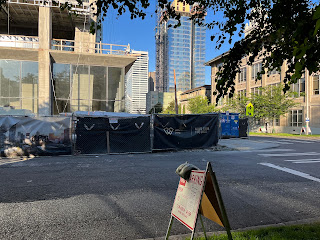 Farewell to my daily encounters with Mother Nature

It's been awhile since my last post, and the month is running out. Some of you may recall I've held to the commitment of a minimum of two posts a month. If I can't do that, I should give up my blog. So here I am on countdown, but what a crazy month it's been since my last entry on Saturday, June 25! 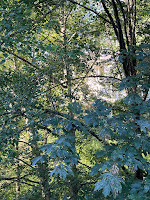 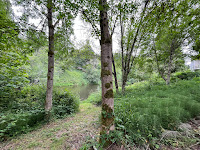 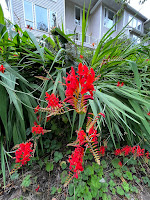 That day was supposed to have been my first Open House on what I was anticipating to be the long and laborious trek of selling my house. Instead, I received an offer the day before (June 24) that was too good to pass up. I accepted it, so the June 25 Open House was canceled, as well as all subsequent ones. Today the sale was recorded and, for the first time since 1987, I am no longer a homeowner! 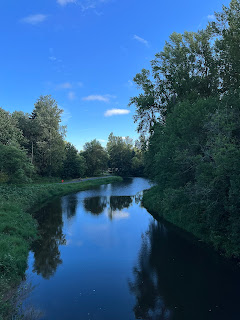 I'm exhausted as I write this. In this past month I've discarded, donated, and offered up hundreds (maybe thousands) of items. Multiple trips to Goodwill have been made and ultimately a junk service arrived at the house to cart off everything that wasn't packed up or disposed of in all those various ways. I've unpacked most of what was moved into my new apartment at a retirement community in urban Seattle on July 19. Three of my offspring sprang into helping action, so I had help of at least two of them for an entire week. Lucky, lucky me.

I admit I'm proud of downsizing and getting into a space more appropriate for an old woman. I also admit I'm regretting some of my decisions about what to get rid of and wishing I'd ridded myself of some of the things I moved. Several dozen boxes of 'stuff' and a few pieces of furniture are stashed in a rented storage unit for further review as soon as I'm able to step away from settling in. I hope to have disposed of everything in storage by year-end. Undoubtedly I'll be writing about that agony in future posts.

As happy as I am to have made the decision to move to a retirement community before I need assistance, I'm also nostalgic about the natural beauty I left behind. I shall never forgot the fragrance of evergreens and scents emitting from the abundance of beauty our earth's covering supports. The beauty of the Sammamish River as it flowed nearby never failed to move me.

I'll be writing lots about my new urban environment in future posts; today I'm sharing a tiny bit of that beauty I left behind.