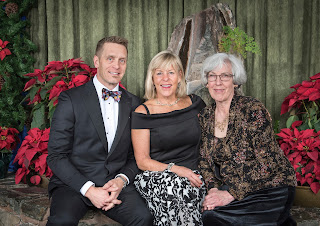 I have been waiting more than a month to write comments about a memorable experience I had before Christmas. Reason? Photographs ordered, but not delivered until yesterday.

On December 18, 2016, I was a guest at the Bracebridge Dinner at Yosemite National Park, compliments of my California son and daughter-in-law. Just how lucky can one old woman get? Being in the park in winter was enchanting in, and of, itself; attending the dinner was magical.

One of the preliminary (and optional) activities before dinner (we were called by trumpets when the doors to the hall were opened) was to pose for a professional photographer in one of many small alcoves off the large public sitting room in the Majestic Hotel (formerly known as the Ahwahnee Hotel). The photographs took six weeks to be ready, but finally, they are here. 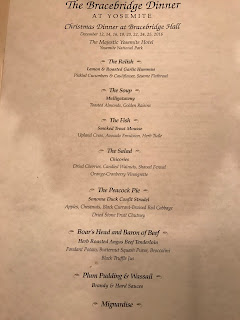 Unfortunately, the pictures of the three of us convey none of the theatricality of the evening. (FYI, the photographer released rights, so there is no disregarding of copyright here.)

To give you an idea of the theatricality, I’m including a YouTube link to a marketing video made in 2016 about the Bracebridge Dinner, which does a great job of conveying the pageantry and fun of the event. Take five minutes to enjoy it. Because cell phones were forbidden during the evening (and what a wise decision to make), the video is an effective means of  transmitting a sense of ambience. The event was truly wonderful—extremely well executed with beautiful food and accoutrements.

So . . . before February arrives, revel in a little look back to Christmas 2016. Life was simpler then, huh.

My dearest values--and I have to dust them! 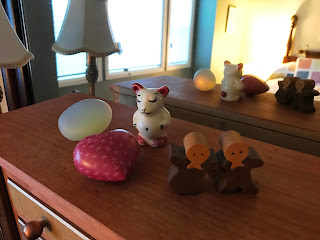 On the top of my jewelry box there are four knickknacks representing what matters most in my life. If you were visiting my home, you might wonder why those four items are always there--or maybe you wouldn't think twice about them. I do, however . . . I think twice and thrice and sometimes twenty times a day about them . . . in fact, nearly every time I walk into my bedroom.

In the foreground is a four-piece wood puzzle: a tiny wooden man and a woman linking arms. Their heads come off, then their bodies come apart, enabling them to stand alone. The puzzle symbolizes Jay and me and our half-century of marriage. I can't remember when I bought it, but it delighted me at the time. The heads are separate, which struck me as representing two people of very different minds and an appropriate symbol for our relationship. (Several months after Jay died, I removed the head of the man and laid it at his feet--but then I decided that was unnecessarily maudlin and put it back on.) That our marriage endured for so long warrants the puzzle standing in intact.

The red heart stone was given to me by one of my daughters-in-law. Obviously, a heart symbolizes love, and this one represents my own progeny and their families. Sometimes I use the term "my family of choice" to describe this group of now ten people and two generations (as opposed to family of origin), but not to imply I didn't like my family-of-origin. In other words, the heart represents my very own children and their families, near and dear always, and probably my greatest achievement in life. 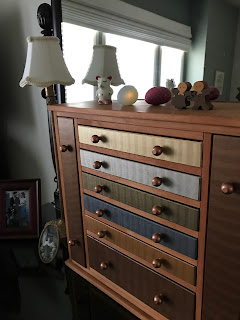 The funny little ceramic bear was on my father's dresser from my earliest remembered childhood. After Dad died in 1963, I asked my mother if I could have it and it's been on my dresser ever since. When I was little, I thought it was a pig, and never went into my parents' bedroom without checking up on it--wondering why it was there. Did one of us girls give it to him? Was it something he had as a child? I'll never know. Only after I took it for my own did I realize this little statue wasn't a pig, but a bear! Now it represents my heritage and family of origin--the parental love I grew up with, as well as the unknown, unsung ancestors who made me who I am.

I bought the glass egg at the Portland Art museum for my longest-running friend, Karen, (we became friends in sixth grade) after visiting her in the hospital where she was to learn of her terminal illness. Karen and I didn't live in the same part of Washington, so we weren't able to see each other often. The light emanating from the glass felt right to me--reflecting my prayers and positive thoughts for her. After she died in 2009, her sons returned the egg to me, explaining how she had treasured it as a symbol of our lasting friendship. The egg reminds me of my Karen, of course, but also precipitates appreciation for all my friends--they are a lifeline now and always.
at 7:03 PM No comments: