The doll with the beautiful hand knit scarf is now residing in Avignon. Looks like she's staying warm and actively enjoying a shopping trip. 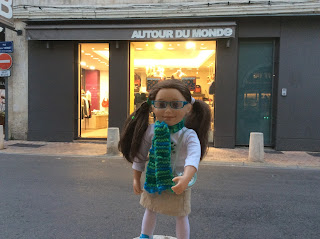 Traveling back in time

Yesterday I finished a project I'd been working on for two days, sorting the posters and programs from my college days as a drama major at the University of Washington. In response to the school's request for memorabilia, I am loaning my little collection to the School of Drama for an event in May celebrating its inception as a school. It broke off from the U.W. English Department in 1941, seventy-five years ago!

According to my contact at the university, there is a shortage of archived material from the years I attended ('58 - '62). That's probably because there was a regime change in 1961. Glenn Hughes, who had founded the drama department in the 1930s retired, and Dr. Gregory Falls swept in from Vermont to head up what was then one of the most prestigious Drama Schools in the USA.

In an effort--and probably a necessary one--to make it his program, not Glenn Hughes' program, he quickly orchestrated many changes. The net effect was serious alienation felt by the then current students. (Painting the walls of all the dressing rooms in the university's three theatres--walls that bore the signatures of every student who had been in every play in that venue, instantly infuriated us, just for starters.) Likewise, I'm certain that as subsequent leaders of the school arrived, each begone regime faded as the new one blossomed, but that was the only one I  lived through.

As I cataloged the posters, photos, and programs from plays I'd acted in, I reread the newspaper reviews. Maybe I kept only the good reviews because I was actually impressed with how frequently my performances were mentioned favorably. (In those days, reviewers from the two daily newspapers, the Seattle Post-Intelligencer and the Seattle Times, saw nearly all U.W. productions.)

I don't care whether or not the School of Drama ends up being able to use my collection at the reunion, just organizing them made me feel happy. After keeping this stuff for so long, to finally bring it out, put it in chronological order, and recall people I'd not thought of for many decades (many no longer residents of earth) was immensely rewarding. The whole process rather dazzled me: The thrill of being cast; the challenge (and yes, the drudgery) of rehearsing; the excitement of opening; the triumph of eliciting appropriate responses from the audience; the delight of taking curtain calls to enthusiastic applause. All told, it was an incredible way to learn about and discover life.

I was also impressed with my own stamina back then. After one show was over, it would only be a few weeks before another audition, another triumph of getting cast, another six-week rehearsal period, another production run. Each show ran for four or five weeks, Wednesday through Saturday. All that with a full academic load, too--it's hard to imagine the chronic outpouring of energy and the balance of fatigue and exhaustion that prevailed.

Jay was on my mind a lot while I worked on this project, too. We met backstage in the fall of 1961 at a play Dinner with the Family by Jean Anouilh. I was acting; he was on the backstage crew. Ironically, that is the only show I don't have a program for. That makes me sad, as it was the first time our names appeared on the same piece of paper. A year later our names were together on  a marriage certificate.

This just in . . . a new photo from a certain granddaughter. It seems that now Taryn is learning to knit. (If this makes no sense, please see previous post.) It also appears that the effort is making Taryn sleepy. Knitting is a lot of work.
at 5:31 PM No comments:

When my nine-year-old granddaughter, Mae, and I had an evening all to ourselves recently, I began to name several activities that we could do together that sounded fun to me: fold origami, draw pictures, play a game, make up stories, knit . . . (I was prepared to continue), she stopped my litany with "KNIT! I want to learn how to knit!"

"Wow, Mae, that's great. Let's go upstairs, find the bin full of yarn and needles and we'll get started." In a few minutes she had chosen her yarn and I'd cast on eight stitches for the lesson.

There's a lot to be said for being exactly the right age to learn something.  Within just a few minutes she caught on and became increasingly absorbed in what she determined would become a headband to wear when cross-country skiing.

By the next evening the headband was done, and we'd made a trip to a local craft store to purchase needles and several colors of yarn for the extended trip she and her parents will take together. And. . . she'd begun the scarf for her doll, Taryn.

I couldn't be happier with this turn of events because knitting is something I learned from my grandmother. Granted, my mother was the person who spent many hours picking up my dropped stitches and
diagnosing and repairing other knitting mistakes. But the bug bit me at an early age under the tutelage of my Grandmother Elmendorf who also taught me how to sew. She died in 1945 when I was five years old.

Never have I begun a knitting project without thinking of my grandmother--and the patience she exhibited as she taught me the rudiments of this craft. Granted, I've never knitted anything but hats, mittens, baby blankets and scarves (some of the latter for American troops in Korea in the early '50s at the prompting of Seventeen Magazine), but I do enjoy an occasional foray into the knitters' realm.

I can't think of anything I'm happier about than having begun one of my grandchildren on the knitting path.
at 4:33 PM No comments:

It's hard to believe that I am beginning the eighth year of my blog. In that time period, it's had more than 70,000 hits. Granted, most people probably are looking for something else, but it is an impressive statistic, yes?

I am disappointed to realize that in the month of December I only wrote one entry on my blog. I resolved last year that I'd write a minimum of two per month. So much for resolutions! That's why I don't make them, but I tried to write a minimum of two new entries each month. If a person has a blog, that person needs to maintain it, in my opinion. Otherwise, poof! But I'm not ready to be done with it! So happy new year  . . . to Beats Talking To Myself . Yes, it's self-centered, but I'm not stopping now.

OK, that being said--here is what I want to opine about today. As I took my first walk of the year in our very bright and very chilly day, I was struck by how gorgeous dead foliage looks when it's dressed up in ice. Normally I wouldn't normally have looked twice at the side of the path as I meandered for my couple-mile walk. I often return home feeling as though I saw nothing because I let interior musings override exterior stimuli. Not today.

I found myself grateful to have occasion to really see the weedy borders of the walking/cycling trail. I hope I can notice ordinary things and appreciate them this year. If I were a resolution maker, that might be a good one. Beauty lurks everywhere.