Twenty-three years in one house, and then . . . 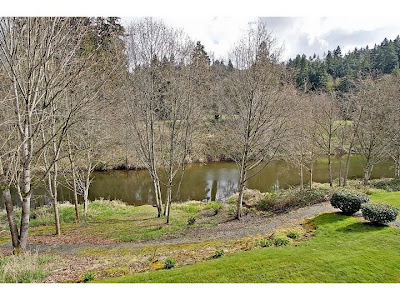 With a little bit of luck, this will be the view from our living room in a few months. No, the street in front of our house didn't wash out. This is the Sammamish Slough which drains Lake Sammamish into Lake Washington. This is our new "waterfront" property! Last night the offer we made on a condominium townhouse was accepted. Now we are on a wild ride, as in, "Oh, my gosh! What has to be done within the week to get our house on the market!" Hubby and I are both ecstatic about the property and its location . This picture was taken from the deck of the condo. So I haven't stopped blogging--I just couldn't write while I was holding my breath.

I began today (after returning from my exercise class) by drawing, copying photographs I’d clipped months ago from the New Yorker. These were black and white portraits of famous people, so I selected several and made pencil sketches.

After completing three drawings (all government officials: President Obama, Prime Minister Hatoyama, and Secretary General of U.N., Ban-Ki-moon), I switched to pen and colored pencils and created a fairly successful likeness of my new (but secondhand) stuffed Gund rabbit—a gift from a friend for my birthday with the understanding I’d share it with Mae when she visits.

Not feeling particularly successful in my endeavours (but having fun), I finally packed up my pencils and left the room to do something useful (i.e. laundry). When I came back into the kitchen where I’d left my sketchbook, I was impressed with what I saw. Not bad . . . actually, quite good! The drawing of President Obama, in particular, would be recognizable by anyone, I think. Well, maybe not by Republicans . . . but that’s another story.

Inspired by the colored sketch of the Gund rabbit, I decided to look for some watercolor cards I’d done many years ago of my stuffed teddy bears. Wow! These are darling, I found myself thinking. Then I went on to open a file called "vacation watercolors" and looked through maybe a dozen-and-a-half small drawings and paintings done on vacations over the years. I was surprised how good they were. I vaguely remembered being disappointed in them at the time I was painting, but I kept them as souvenirs of the vacations themselves.

That hopeful discovery caused another hopeful thought: Maybe the Healthcare Reform bill, too, is better than I think it is. Our politicians have so tainted any excitement surrounding the passage of this history-making bill, I’ve become completely cynical. Last night, as I watched the votes being cast in the House chambers, I couldn’t help thinking about my parents. How revolted they would be, particularly my dad, at the way partisan games are played by our legislators. I was raised in a household where we admired and looked up to elected officials . . . uh, most of the time. What’s to admire about our politicians anymore? I feel as if I will scream if I let myself listen to any more condemnation of the newly passed bill.

Maybe in a few months we’ll have some perspective on what’s been happening inside the Capitol for the past year, and especially the most recent four months. Maybe . . . in a few months, when we look with fresh eyes at what was accomplished last night, we’ll be impressed. Let’s hope so.
at 3:24 PM 1 comment:

I’m having fun writing a note or two each week to people I normally don’t contact by snail mail. However, I doubt very much if my snail-mail campaign is going to catch on, judging from my blog’s lack of readership. For instance, in the entry dated February 28 called Let 44 ¢ Restore the Thrill, I made an error. Since no one let me know of my mistake, I’m assuming it’s because no one reads my blog.

When I requested a sheet of postcard stamps yesterday at the post office, my first reaction when I saw them was to argue with the clerk. “Wait! These are twenty-eight cents. Aren’t postcards twenty-seven cents?” You can guess the clerk’s reaction—just another crazy old-woman customer bellyaching about postal increases. There I was, imagining myself as a competent adult, yet completely missing the boat with something as basic as what it costs to mail a postcard. Yowie! Guess I’ll have to reassess my image as someone who knows what she’s doing. Let’s hope this isn’t how my seventies are going to be—learning how out-of-it I really am.

So far, I’ve sent about ten notes in my campaign, and I can tell by the response I’m getting that I’m not the only person who loves getting something in the mail besides ads and requests for money. So, reader—if you’re out there—try making someone’s day with a handwritten note sent by snail mail. It’s especially nice if the recipient doesn’t have to ante-up postage due.
at 1:40 PM 1 comment:

I read somewhere that after six months, most blogs (as in 90 percent) are abandoned by their creators. I can understand why. My blog has taken on its own personality, and—as such—has become a supreme nag. “When are you going to get to me?” it whines as I fold laundry, tidy up my office (a two hour job—it’s atrociously messy), depart for lunch with a friend or exercise at the Y. The impulse to kill it off and reclaim a few hours a week is mighty. BUT . . . it is a supremely fun excuse to write, so for now I’ll let it live.

Since my last entry, I’ve aged. Properly for age seventy, I might add, with much feting and many greetings from the corners of the country. Now that I’m here, it’s no big deal, I’m happy to announce.

Seventy? Isn’t it the new fifty? you may be asking. I’m happy to answer: NO! Seventy is seventy, and it’s old. The catch is whether or not a person considers old as bad. I do not. Old is simply what I am, and although some distinguish young-old, middle-old, and oldest-old (I would fall into the young-old category, by the way), nothing can masque the fact that behind me are seventy years of living. That’s a lot of drudgery, sorrow, and grief, as well as a lot of pleasure, joy, and laughter. On a daily tally, the happiness has it—hands down. I can’t tell you how delighted I am to be here and comparatively healthy.

While I daresay there won't be another seventy years ahead, I hope there'll be at least a few good ones. Onward, Sallie! Onward, blog!
at 12:09 PM 2 comments: