If Earrings Could Sing 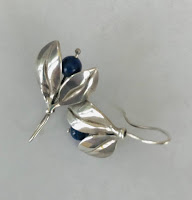 If earrings could sing, I know what the song and lyric snippet would be.

Recently my sister and brother-in-law resumed our pre-pandemic Sunday night dinners together. We were excited as we settled into a window booth at Tavern-on-the-Square, a local restaurant run by the quirky and beloved McMenamins hotel chain. When the waitperson brought our delicious appetizer of roasted cauliflower and brussels sprouts, we joyfully removed our masks for the duration of the meal and didn't put them on again until we were ready to leave the restaurant, and it wasn't until I was settled into my sister's car for the ride home that I took mine off again.

Later that evening, I looked in the mirror to remove my earrings and saw I had only one! Quickly assessing where I'd been and how it might have fallen out, I concluded it had happened during mask removal. As a person with hearing aids, I'm super careful to hold onto them while peeling the mask's ear loops away, but clearly I hadn't been equally careful with my earrings.

After asking my sister to look in her car, I got the dreaded news: nothing! I then called the restaurant to ask if anyone had turned in an earring and learned that because McMenamins runs Anderson School Hotel in conjunction with Tavern-on-the-Square, there's a major Lost and Found center in the hotel. I was transfered to it. Subsequently, I emailed a photo along with the date I'd lost it, feeling a bit defeated. I couldn't help thinking about why I cared so much (besides from the fact it was esthetically pleasing) and realized there were three quirky reasons, all people: one a good friend, one an acquaintance, and one a stranger.

The lapis and silver pair was a thank-you gift from Cheryl, a Milwaukee friend, after she visited us in Seattle in the spring of 1987. She and I had driven to the family ocean cottage where we stayed for a few days, and Cheryl was thrilled with the experience. My father had planted huckleberries many years before and they were bearing fruit during our visit. Every time we went outside to walk to the ocean or drive to town, Cheryl would stop and pick a handful of berries to eat. When she ordered the earrings from a start-up catalog company, she wrote on the gift card how they reminded her of huckleberries and hoped I'd think of our beach trip when I wore them. True; I do.

In 2011 I was elected to our condominium community's Board of Directors, serving with four other neighbors, none of whom I knew well. Everyone was friendly, but Bobbie, the treasurer, exclaimed, "You are wearing the exact same earrings as I am!" And sure enough, she was right. When we both showed up at the next meeting wearing the exact same sweater (in different colors, though), we decided it was a sign; we should always plan on wearing one or the other item to every Board meeting to represent our solidarity as the only two women on the Board. From that point on, Bobbie and I wore our identical earrings to the HOA board meetings, and not a Board meeting goes by that I don't think of her, even though she moved away in 2012.

Fast forward to 2017 when I was strolling across the former Worlds' Fair Grounds in Seattle known as Seattle Center. A woman was walking toward me and when she got close, she burst out, "Oh, my god, you're wearing earrings designed by my aunt!" We stopped to talk and she went on to tell me her aunt was deceased, but had been an Alaskan native who'd sold several of her beautiful silver jewelry designs to the same catalog company in 1985. I loved hearing this personal connection.

All these associations were jingling around in my head on Tuesday morning, so I decided to drive to McMenamins to speak in person to the host at the restaurant and drop off a hard copy of the photo at the hotel's Lost-and-Found. The restaurant host graciously invited me to walk through the restaurant and look around the booth where we'd been sitting the prior evening. Nothing. I then dropped off the picture at the hotel check-in desk where the very nice clerk expressed sympathy but not hope. I walked back through the restaurant and second guessed myself about which booth it had been. A young couple had just been seated at the booth in question, so after hesitating a second, I stopped and asked if--when they were done with their meal--they would mind glancing around the bench and under the table to see if a lone earring was hiding out. "We'll do you one better," answered the smiling man. He jumped up, turned on his cellphone flashlight and climbed under the table. Nothing. He and his girlfriend both expressed sympathy for the missing item.

When I got home I thought of my friend, Monica, who had recently received a call from our close-by supermarket with the news her eyeglasses had just been found after being missing three weeks. She explained to me she'd willed them to be found! Darn it, I thought to myself, if Monica could will her glasses to be found, I can will my earring to be found. With so many memories associated with them, I wasn't ready to say goodbye.

Right around suppertime the phone rang; the call screen said McMenamins. "Sara? I have good news" is how the caller began. Yes, someone had turned in an earring they found on the floor at Tavern-on-the-Square. I drove to pick it up and on my way home imagined the earring was singing Amazing Grace ". . . I once was lost but now I'm found. . .." I tucked the two earrings together in my jewelry box, wondering if I'd ever let myself wear them again, or if they were too special to risk losing. Nah--I'll just be more careful next time. A found earring deserves to be worn. 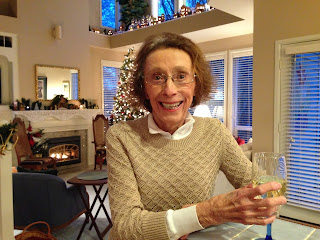 My friendship with Arlene started out when 'the woman across the street' came over to introduce herself to my husband and me that July day of 2010. Crossing the street to shake our hands with a big welcoming smile is an unusual an activity in greater Seattle. Seattleites are known for 'minding our own business,' a euphemism that can come across as just plain indifferent or snooty.

Within a few weeks of meeting her, I learned that Arlene was originally from Sturgeon Bay, Wisconsin, which let me understood immediately why she was so friendly to us. That's just what Wisconsinites do! Almost forty years earlier, I had been amazed and thrilled to be greeted by neighbors when my family moved into our Wisconsin home in Wauwatosa. Friendly neighbor reach-out was something I was completely unfamiliar with as a Washingtonian. Even though Arlene had lived in Boston, San Francisco, Salt Lake City, she had that friendly Wisconsin beginning.

Within just a few months of being acquainted, I sensed that she and I were going to become good friends. Her wit, curiosity, and engagement with current events made her always interesting and fun to be around. When Jay was diagnosed with his rare form of cancer, Arlene with her nursing background really understood his limitations and prognosis--and without being cloying or sentimental provided support for both him and me.

After Jay's death, Arlene and I got together frequently to chat. As a woman who'd been on her own for a number of years, she was helpful and inspirational to me, the new widow. She was expert at navigating condo ownership, and was a great model for managing a solo household. She was a real life saver for me with her support and insight, not to mention her sense of humor.

When she sold her condo and moved to an adjacent suburb, I missed her as a neighbor, but she was--by then--a good friend, and we got together regularly. Whether it was to talk about what we were reading, share a meal, or just laugh/moan about politics and the antics of our fellow humans, we always had a wonderful time together. We especially enjoyed meeting at inexpensive restaurants for dinner. 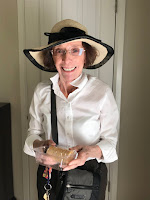 In the past several years her health began to degrade, but she was determined to persevere. In her own words: "I'm not giving up!" But then the pandemic arrived, complicating everything for everyone. We didn't see each other for more than a year, and as life would have it (or, in this case, as death would have it), we never made it to the other side of our social isolation. Regularly catching up on the phone, we were counting down the days until she was 'fully' vaccinated (less than two weeks beyond her second shot) during our last phone conversation April 4. We agreed I would visit her apartment to enjoy our first in-person visit since February 2020. But . . . that didn't and will never happen. Arlene died April 13, 2021.

The saddest thing about losing a friend when there's no service or celebration is having nobody to tell how much you miss that person. Of course I wrote condolence notes to her sons (neither of whom I know, although I've heard a lot about them over eleven years), but it's not the same. Not the same as physically gathering with others who are all feeling the common loss. A wonderful aspect of a celebration of life or a church service means that friends of the deceased who may not know each other can offer support just by gathering together. Arlene had lots of friends, but I know only the neighbor-friends she left behind, not her dozens or other friends. And, of course, we both were pretty much beyond the 'party years' when we entertained groups of friends. Lots of people pooh-pooh the idea of a commemorative event after death, but survivors truly have need to talk about their deceased friend and, in so doing, they comfort each other. And that's the underlying motivation for this post. I want to share with anyone reading this how much I will miss Arlene.

Just looking at her photos here made me smile. Arlene was an accomplished and remarkable woman, a devoted mother, adoring grandmother, hiker, adventurer, WWII buff, fashionista, humorist, and intellect. She stayed current on world events, which she peppered with wisdom and perspective. I loved and admired her, and will miss her always.