In the late 1940s and '50s, once a year for Sunday lunch my dad would make a family recipe called minute pudding. He always invited his family, especially his still malleable daughters, to share it with him.

Minute pudding is not a delicate dessert, as you might imagine of a recipe called "pudding." It's a main course made from flour, milk, baking powder, and salt—flavored with nutmeg. The gooey dough looks something like dumpling dough, and after it cooks it still looks like a big, doughy lump. We would sprinkle sugar on it and pour milk over it. It was like eating doughy, flavorless bread dunked in milk. It was awful!

“Can you this being your entire food for the day?” Dad would ask us. We'd grimace. "I'll bet you'd think it pretty darn good on an empty stomach, though,” he'd continue, then add something like “M-m-m-m . . .  there’s nothing quite like minute pudding.”

He was right; there is nothing like it in any recipe book I’ve ever seen. It was a strictly homemade concoction invented out of desperation by my great-grandmother, Anne French Johnson.

Bring to a boil 1 pint of milk
Add Salt and nutmeg to taste
Sift flour (there is no quantity, but start with 1 cup) with ¼ tsp. baking powder

Keep adding flour to the milk until thick.
Turn into a bowl and bake for 20 minutes in a slow (300 degrees) oven.
In my handwriting I added, “Eat with reverence.”

As we ate our minute pudding on those Sundays, Dad would narrate stories he had heard as a child from his father who grew up in rural Iowa and left home to 'come out West' as soon as he completed eighth grade.

Apparently there were a lot of times in my grandfather's childhood when he didn't have enough to eat. Grandfather died when I was three (he was born in 1860), so I never had a chance to talk to him about his early years myself. But my father filled us in on tidbits, as we were ready for them.

We learned that sometimes grandfather and his two sisters suffered from much deprivation in their isolated cabin in rural Iowa, especially if hunting was poor and someone didn’t shoot a turkey or some other wild animal for them to eat. "They went to bed hungry many nights, and if it hadn't been for minute pudding, they might have starved to death.”

Their father, my great-grandfather, was Rev. Allan Wesley Johnson, an itinerant Methodist minister born in 1819. He traveled from town to town on horseback throughout much of Iowa and Minnesota. His work kept him away from home for long spells, and clearly the remuneration was little more than the hospitality of the people he ministered to. He was also an alcoholic (although my father’s word was 'drunkard,' no doubt used by my grandfather, too, when talking about his childhood deprivation). That meant when the Reverend Johnson was home, he was frequently unable to provide for his family.

I was probably thirteen when I realized my dad actually didn't love minute pudding, despite the "m-m-m-m" that inevitably accompanied its consumption. Instead,Dad was repeating a personal ritual that he had learned from his own father, a ritual created to never forget how blessed it is to have enough food to eat.

As I read about the increasing poverty rate in our country, I think about this story . . . this recipe. I haven't made minute pudding but once in my adult life, but just thinking about it makes me feel so blessed.
at 12:29 PM 1 comment:

Several years ago now, our granddaughters from Minneapolis and their parents came to visit us in Bothell. As the hosting grandparents, we wanted to do some activities unique to Seattle. In that spirit, we planned a trip to the Seattle International District to shop at the 'nothing-like-it-in-the-Midwest store, Uwajimaya. Not only did we enjoy wonderful food there, but the shopping was fantastic. Among other purchases, my younger granddaughter and I each bought a pencil that looked like a cigarette. 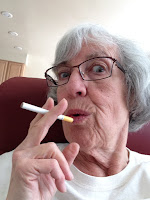 Recently I was cleaning dresser drawers and came across it. I have to confess, just for a moment, I thought there was a real cigarette in my dresser! (Good old days? What an awful thought!)


I stopped cleaning and began to pose in front of the mirror, considering how I might have a little fun with my wooden 'cigarette.'

I don't ever want to sharpen it so I could write or draw with it. No, I'd rather horrify people--taking it out of my purse in a restaurant, say. I would be immediately asked to leave the premises! Driving with it in my hand on the steering wheel could be fun, too. Then there's Symphony Hall, cinema lobbies, art museums . . . the list goes on. What about just standing in front of my house, holding it in a provocative pose?

Of course, it just went back into the drawer and I continued tidying. The next time I clean out that drawer (five years, at the rate I'm going), I'll probably have forgotten all about it and will have the same--or even stronger--reaction. I hope so. My life is pretty dull these days. 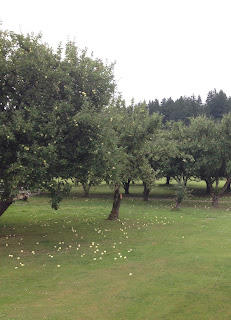 Now, as typical of century-old apple trees, the fruit isn't very good now. Even most of the critters that roam the land seem to leave it alone. The trees drop their bounty all over the golf course (probably making it hard to spot a ball that's gone missing) in this random pattern. Isn't it beautiful? I was quite taken with the cheery, perky look of light green little spheres lounging about on the deeper green grass, as I passed by this morning.

The Wayne golf course land, by the way, has been saved from development by the hardworking grass roots organization I've written about in past posts--OneBothell.org. Check out the new website to see what a wonderful and vital success story it has to tell. I'm a proud volunteer for OneBothell.
at 3:42 PM No comments: