Putto and the Santa Blues

The broken, raggedy cherub--a member of the illustrious putti family of Baroque-style religious art--adorned the top of our Christmas tree every year when I was a child. I hated it! My friends all had modern glittery angels on their trees, and we had this dirty, cracked, buck-toothed, dopey-looking cherub that my mother always said was "from the ruins of Pompeii."

I was twenty when it finally occurred to me (a little art history in college had helped) that there was no way the cherub was from Pompeii! I asked Mother why she told us that every Christmas as we hung it on the tree. "Because my father always said that to his children," she replied. (My grandfather had a great sense of humor, I've been told)

Mother, too, grew up with the putto on her tree, and she wasn't crazy about it as a child, either. No one knows which ancestor obtained it, but we know that some of those ancestors traveled to Europe in the nineteenth century, so it was probably picked it up at an outdoor market, or a shop near a decaying church in Germany or Italy. Maybe it was stolen! (I have no character references for great-great grandparents and their predecessors.)

As an old woman, I adore the putto. After all, it's been in my family for a century or more. It's too frail for the top of the tree these days, but it sits on my mantel (both arms broken and re-glued, missing fingers, etc.) and makes me sad (because it's so broken) and happy (because it's so 'family') whenever I look at it. It's certainly part of my Christmas heritage, and my children's, too. Unfortunately, none of my grandchildren have ever seen it because they've never been at our house during the Christmas season. 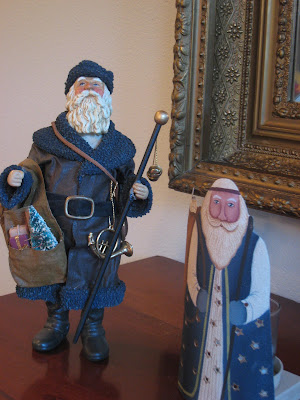 But I also love my blue Santas--both of them gifts within the last thirty years, and both handsome together, even though they were gifts from different people. One can easily see the St. Nick influence in the garb. If you hear me say "I have Santa blues," I'm not telling  you I'm depressed.  I'm just admiring this duo.

As Hubby and I get older, we tend to put out less holiday decor. We rarely entertain during the holidays, and our grown children have their own holiday traditions, which don't include visiting 'the folks.' Yet some of our Christmasy things are so beloved and traditional after fifty years, we can't imagine not taking the trouble to display and enjoy them.

If there's ever a Christmas where the putto isn't unpacked, well . . . you should probably worry about us.
at 8:58 AM No comments: 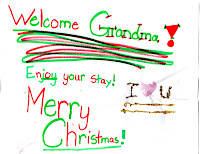 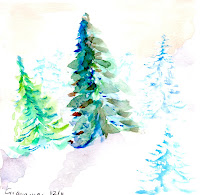 Gifts are uppermost in the minds of many this time of year.  But the intangible ones can be the most dear, and time is certainly among the most precious. It could be argued that time is right up there with frankincense, myrrh, and gold in the twenty-first century.

Last weekend we visited our family in the Midwest. One of the activities I enjoy doing with my two granddaughters is making art.
We usually find some form of art to create together during our visits. This year, Maddie (8) had new watercolors she wanted to show me. "Let's paint, Grandma." 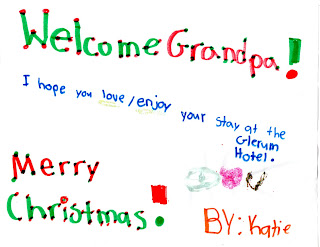 Katie (10) had a box of art supplies from which she chose a pristine set of opaque watercolors. Armed with a supply of water, a few paper towels, several brushes, and paper--the three of us spent an hour, or so, talking and water coloring. What fun it is to engage fully in an activity that can be done while talking! Quality sharing is what it means, and that is another priceless gift. Although our visits with our dear girls are short, we have found ways of extracting joy in every minute of shared time.

I intended to leave my evergreen tree painting with the girls--(I even signed it for them) but discovered it later mixed in the WELCOME signs the girls made in anticipation of our visit.
at 1:45 PM No comments: 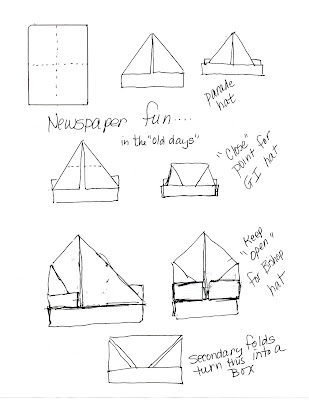 I have just realized the saddest thing . . . regarding the new size of newspapers.

They are too skinny to make the classic paper hats of yore.

For many years I could entertain small children by helping them create hats (after which we could put on a play or have a parade). With the new slender newspapers, the proportions are wrong.

Yes, you can trim the paper, but the hats no longer fit human heads.