PT 4: Who Loved Me into Being

Yes, you understandably might have assumed I was done with this topic. Not quite. There is one other person who loved me into being: William Neill Hughes, Jr., my great-uncle.

Although my mother kept up a correspondence with her mother’s only brother and the longest surviving member of her family, I didn’t meet my great uncle until I was a junior in high school. Uncle Will lived in Florida and although he was a veteran of the Spanish American War and WWI (European Theater), he’d never visited Washington state because it was an arduous trip to come from Florida where he and his wife had lived since his retirement.

When my family (mom, dad, sister and I) made plans to travel to San Juan, Puerto Rico in May of 1957, my mother was inspired to ask Uncle Will, a recent widower, if he would like to make the short flight from St. Petersburg to join us. She was thrilled when he wrote back return mail with an excited ‘yes.’ He would come for just a few days, motivated to finally meet his two great-nieces, then ages seventeen and twenty-one, and reconnect with his beloved niece.

When I first met him, I found him a little bit intimidating (after hearing about him from Mother for all those years), but also a little bit disappointing. We were there for the first-ever Casals Music Festival in Puerto Rico; my great-uncle was not. He was there only to see our family. At seventeen, I was passionate and even obsessive about music. Pablo Casals was my musical hero, and so were the specific musicians invited personally by Casals to participate in the Festival. How could anyone be indifferent to this event! Nevertheless, it was exciting to meet such an old relative! (He was seventy-nine then, a year younger than I am now.) Since all four of my sister's and my grandparents were deceased by 1946, it was quite exciting to meet someone old enough to be our grandparent.

Within minutes of our introductions, Uncle Will asked my sister and me to please call him just ‘Billy’—not Uncle Billy.  H-m-m-m . . . that was really a fun idea.  It seemed almost irreverent to call him “Billy,” but we quickly obliged and changed how we addressed (and referred to) him. Mother, however, continued forever to refer to him as Uncle Will--the name she had known him by her entire life. [Note: In the post dated June 29, 2013, I wrote about my great-uncle and referred to him as "Uncle Billy." As I recalled our Puerto Rico experience during this writing, I realized we didn't use "Uncle" when addressing him, and verified that with letters I have from him.]

For most of the three day visit, Billy sat in the shade under an umbrella on the hotel grounds, eager to talk and bask in our company and conversation whenever we had time. He and my dad had a lot in common, but he especially wanted to catch up with my mother and get to know her daughters. Our family had tickets for all the festival concerts, but most were in the evening, so that worked well. Billy retired early, and besides, he wasn’t there for the festival; he was there to see the Johnsone family.

On the last day of his visit, my mother called me aside. She was visibly upset. “Sallie, Uncle Will has pointed out to me just now how disrespectful you can be to me. He said I should not tolerate it. And he’s right—I put up with your sassy retorts too much. So from now on, I'm not going to let you get away with a flippant tone of voice or rude reaction to my requests!”

Ouch! Naturally, I was annoyed—no, more like angry—with this old relative who felt it was his duty to share a punitive observation with his niece about me. Who was he to talk about my behavior! I barely spoke to him for the rest of his visit, and when he flew home to St. Petersburg, Florida, I wasn’t sorry. But . . .  deep down, I knew he was right and respected him for noticing. I could be feisty and ill-mannered to  my mother, and was especially annoyed with her in Puerto Rico because I wanted more than anything to gawk at, swoon over, the musicians at the hotel—the admired performers whom I idolized. In my heart I was a classical musician groupie and wanted to act out the part. She was determined I would, in her words, "Act like a lady."

When we got home, all of us received individual letters from Billy thanking us for the opportunity to get together. It was the beginning of a bond between the two of us that solidified over the next twelve years of his life. In that first letter, he enumerated what he saw as my talents and strengths and deplored me to live up to my potential and not to get bogged down in the pettiness that often happens with family members living in close proximity. Expressing outright admiration for what he saw as the good in me, he knew exactly how to get my attention and make me think about his observations. He implored me to continue developing our relationship by agreeing to correspond with him.

I wrote him back, and thus began our deepening “pen pal” friendship. Throughout the rest of high school, all of college, and until he died in 1969, we corresponded regularly with long heartfelt letters. Billy consistently praised my writing, which prompted believing in myself as a writer, and he urged me to consider writing as a profession. Within a few years of our 1957 meeting, both of us had converted to Roman Catholicism, which gave us an immense amount of subject matter to share in our epistles. Understanding my devotion to him over the years, my husband strongly endorsed giving the Hughes family name to our youngest child, born in 1968, as a middle name. Billy was delighted!

How lucky I was to have made the acquaintance with Billy while still forming my own notion of who I was and would become. Billy’s praise for, and faith in, my writing abilities might even be seen as the seed this blog. He was a true blessing in my life.

The comfort of nature 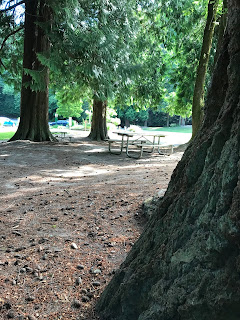 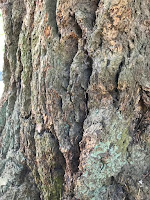 Recently I realized in a different kind of way just how comforting it is to sit quietly among trees, and in particular, to feel--stroke--the bark of a huge Douglas Fir.

I'm fully aware this is not an original observation. In fact, it's probably as old as the spoken word and perceived long before language occurred. There is always comfort in nature. But as I sat in Blyth Park across the river from where I live, no one else was anywhere around. Although two cars were in the parking lot, their drivers must have been walking on a nearby trail. It felt like the entire park was all mine . . . and the birds, of course, and various critters that live in the trees and ground. 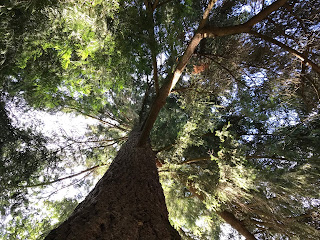 Stroking the bark of this giant fir was surprisingly soothing. I wondered how many others had sat there and felt the bark, its skin. If I could have stayed there all day, I would have. The cares of Covid-19, even the isolation it has dealt us, seemed not to matter much while I sat there. It was as though I was connecting with everyone who has ever approached this tree. Blissfully the tree is unaware of the virus and the new distancing protocol. How comforting to think about this magnificent tree could spread its branches--unconcerned if they should come into contact with another tree's branches.

I'm familiar with the concept of Forest Bathing. Although I didn't have a certified leader taking me through a sensory connection with the forest, I made my own bath of quietude and calm. It was better than bubbles for calming stress.
at 5:16 PM No comments: