Anticipating his milestone birthday, Hubby was adamant about not having a celebration. "Not even dinner with a couple of friends?” I asked.

“How about just you and I dining in a fancy restaurant?”

I wanted to honor his wishes, but damn it! This was an occasion to be marked. As one of our friends said later, “Millions of people are denied the privilege of making it to this age.” I continued to think about some kind of celebration, which wouldn’t be big or splashy, that would do justice to the occasion.

Three weeks before his birthday, Hubby received a solicitation for a summer donation from one of his favorite charities, a local feeding program for homeless people called OPERATION: Sack Lunch. He set the plea-letter down. “I wish I could give her (referring OSL’s founder, Beverly Graham) an additional donation now—but she’ll just have to wait until later in the year,” he said sadly.

Eureka! An idea came to me. Bev Graham is a wonderful singer/entertainer, as well as the executive director of OSL. Could I get her to sing Happy Birthday to him? He’s been a consistent and generous donor to OSL for almost twenty years. What if I made a donation to OSL instead of buying him a big gift? Would Bev come to a small party in our home?

The thought intrigued me, but I was reluctant to ask. What if she said no? Wouldn’t I be embarrassed? I ran my idea past a friend. "It's a fabulous idea," she said. So . . . I suppressed my feelings of presumptuousness, screwed my courage to the sticking place (thanks, Lady Macbeth), and e-mailed Beverly Graham through the OSL Web site.

Bev's response came almost immediately. “Yes, in a heartbeat . . . but I’m going to be in town that weekend. How about this though... Send me his favorite songs... I will video a special birthday concert and send it over to where you can grab it for his birthday." 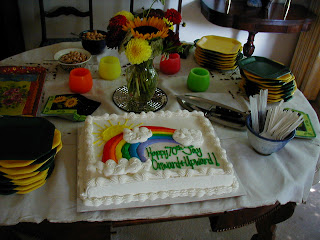 Suddenly the suprise party plans were underway! I invited a few friends, family and neighbors for cake and ice cream on the afternoon of Hubby’s actual birthday, which this year fell conveniently on Sunday.

“No Gifts,” I wrote on the invitation. Then, in a flash of inspiration, I added: “If you're one of those people who insists on bringing a gift anyway, please consider making a small donation to OPERATION: Sack Lunch in Hubby’s honor. OSL is a non-profit organization he has generously supported since its inception. You can read about it at http://www.opsacklunch.org/ I'll have a bowl out to accept OSL gifts.”

The party was fun and the fund-raising results were astonishing! Between the donation I made in his honor to thank Bev for her lovely hour-plus concert sung just for him (and videoed on DVD to be played at the party ) and the generosity of hubby's friends and family, more than $1,000 was raised for OSL.

Best of all, Hubby is still smiling about how his dreaded milestone-birthday brought some much needed cash to OPERATION: Sack Lunch.

Jay is an exceedingly blessed old man, Sallie.
For my own present to him, I submit my sequel, which came to me two years ago, to A. E. Houseman's "Shropshire Lad":
Now of my three score years and ten,
Not a damned one will come again.

Sallie - Oh how lives connect! Bev sang at our wedding as I was heavily involved in OSL at the time and was getting Safeco Life to be involved with it. What a wonderful gift, special treat and blessing for your hubby. I haven't heard Bev sing in ages and I miss her. OSL is a wonderful and amazing ministry.