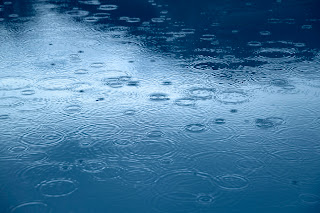 “For the rain it raineth every day.”
A ditty sung by Feste, the clown in Shakespeare’s Twelfth Night, keeps running through my head. It has been raining almost continuously for weeks. Oh, sure, we’ve had what the Seattle weatherman calls “sun breaks,” a term known only to the locals. Whoever heard of such a thing in other parts of the land?
When I was working, I arrived at my desk during the dreary months just in time for the sunrise and returned home in the dark. During the day I sat under fluorescent light that never varied. Sometimes I could hear rain on the roof of my three-story building (I was on the top floor), but usually I was blissfully unaware of the weather.
Now I’m retired, I am discovering that weather not only dictates what activities I do, but also how I am feeling. Rain does not cheer me up. When I lived in Wisconsin, winter rain was celebratory—no need for shoveling. But here in Washington state, rain is a dreary way of life from November though the end of April. Exceptions are notable, newsworthy. Oh, how the gray skies can drag you down.
Years ago I remember reading that Seattle had the highest suicide rate in the country, attributed to its incessantly overcast days weaving through the holidays and into the bleak beginnings of the new year. I think the city has relinquished that title, but it has to be up there somewhere in the top ten cities for having the highest number of depressed people. For me, anticipating Thanksgiving and Christmas, seeing old friends and renewing acquaintance with “once-a-year” people, decorating the house with fragrant boughs and glittery ornaments, baking, and generally just sprucing up gets me through year-end. But come January and February, everything changes.
When the new year floats in on its rainy pontoons, I almost wish for snow. (I would be reluctant to write this if I still worked for a living.) Snow in Seattle means the possibility of schools being closed, of sledding on any of her thousand city-street slopes, of rolling snowmen, and chatting with neighbors who have come outside under the guise of shoveling (but who end up talking and inviting each other over for hot chocolate or steaming tea). But it rarely happens; instead it rains. Drizzle, piddle, spitting, pouring, drenching, misting. Always gray—light gray, dark gray—sky.
When Hubby and I relocated our family to Wisconsin in 1972, the first snowfall fell in October. Eager to rejoice in its beauty, I hurried outside to try out our new snow shovel. Waving to neighbors, I expected a cheery response, but instead got back dour looks. Eventually I understood: snow turns into ice; ice becomes the enemy. Yes, I learned to dread snowfall during our fourteen years in Milwaukee. But oh, were the skies bright in winter. When it wasn’t snowing, it was sunny. Even the coldest days, when the snow squeaked under foot, sunshine drenched the landscape.
Here in Seattle, I am tempted to start marking my calendar with doodled droplets to track the relentless pattern. But the weatherman is doing that for me and reminding me on a daily basis how much rainfall we’ve had. There is actually steam rising from my trees, and the sky is what Microsoft Word would identify as gray-shading, about 12.5 percent. I’m getting good at estimating the color of cloud-cover.
Gray skies have a way of getting to you that there’s no escaping, so I’m putting on the teakettle and digging out a CD of Ella Fitzgerald’s saddest songs. If you can’t fight ‘em, join ‘em. My blues are here to stay while skies are gray.
at 2:05 PM

Sallie:
How well I relate to your essay. Yes, this long spell of rain, overcast skies, and drizzles are about sending me over the top. How I long for at least blue skies.
Lucy

This can be an edited-out comment. Hawaii is lovely at this time of year. Sunny, sunny, sunny--reads the forecast. And we're loving it.