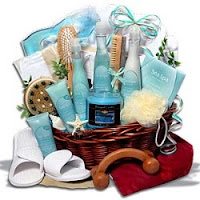 (The product to the left costs more than $200, and is advertised as a Mother's Day gift.)

A number of years ago, I noticed a mother with four young children in a card shop the week before Mother’s Day. “Look through the cards,” she told the two who were old enough to be in school. “When you find one that says how you feel, call me over and read it to me.” She kept the younger ones, whose ages were probably two and four, by her side and read cards aloud to them. When she found one they liked (easy to recognize because of their squeals), she knelt down and hugged them tightly. ‘Thank you very much for the wonderful cards,” she said sweetly when all four had shown her the ones they liked best. “I’m cheap,” she explained to me as she herded the children out the door with no purchases. “I receive the sentiment without spending a nickel.” I couldn’t help but think she had the right idea.

Mother’s Day is almost here again. Of the many mothers known personally to me, only one savors the event without reservation. I worked next to her for several years and heard her preening and primping, almost like a bride-to-be, in order to present herself in the most favorable light at the family’s celebration. She adored being matriarch of the family and explained to anyone who’d listen how privileged her grown children feel to be able to trace their lineage from her—and how thrilled her in-law children are to have married into her clan. After Mother’s Day, she always called co-workers to her desk to show them whatever gifts she’d received and phoned her friends to share each minuscule detail of her fete.

While several of my friends overtly abhor Mother’s Day, the majority of us respond to this holiday with mild apprehension or vague dread, wanting to be gracious to our grown children who remember and generous to our children who don’t. The gaps that already exist in our society—generational, economic, self-righteousness—widen on this occasion. Haves and have-nots are pitted against one another in a new way: mothers whose offspring remember her on the day, and those who do not. Is it because they forgot? Or is it because they don’t love her?

The retail sector does its best to promote need and greed among its guilt-ridden- constituency. While some mothers may wish their children would do more for them on the second Sunday of May, others wish their children would do less—that is, spend less. Florists mark up their arrangements and delivery charges. Extravagant packaging increases the price for Mom’s favorite candy. And hideous bud vases disguised as porcelain women in brimmed hats and long skirts containing a single “fresh” rose are actually sold by the dozens to adults who will present them to their mothers. Mylar balloons at $4.50 apiece and decorated with colts and lambs spouting “I love my Mom” cavort across the ceiling of my local grocery store. Grotesque cellophane wrapped baskets of bubble baths and talcum powders loom on the ends of pharmacy aisles; made-in-China plush animals wearing ribbons inscribed with filial adoration perch by cash registers at convenience stores.

Full page newspaper ads and store flyers arrive the week before Mother’s Day that show slender, sulky “moms” reclining in lacy bikini underwear or filmy negligees. I can’t help but wonder who the target audience is, who is being coaxed to buy undies for this occasion? Children with Oedipal complexes? Fathers who wish to jump the mothers? Or the mothers themselves, hoping to become sirens when they aren’t wiping noses? Disappointments surely ensue; stretch marks and varicose veins can’t be airbrushed on the live recipients.

Telephone circuits get busy and stay busy from morning till night. Florists have their second largest day (after Valentine’s) in the retail cycle. Candy makers and card shops love the occasion. And only in America would merchants dare suggest that children—big or little—surprise their moms with 18k gold baubles costing $1,500—or rings studded with precious stones commemorating the equally precious dates of birth of themselves and their siblings.

What are we thinking! Nothing takes the place of a child’s spontaneous hug, be it from a grownup or a toddler. To be meaningful, expressions of appreciation shouldn't be prescribed like a drug or advertised like a back-to-school bargain. Hugs can’t be store-bought. Real affection is best expressed without prompting. A great many mothers would prefer their children skip the folderol of the holiday and simply say “I love you, Mom,” whenever the spirit moves them.
at 3:40 PM

Fabulous, hilarious, spot-on, worthy of publication in "Family Circle". This is a winner!!
Lucy

Wow, Sallie, how enlightening. Until reading this, I had no idea that mothers weren't thrilled with the day. Personally, I can't stand the day, not because I don't love my mother, or want to show my appreciation, but because any demonstration is "forced," and therefore meaningless.