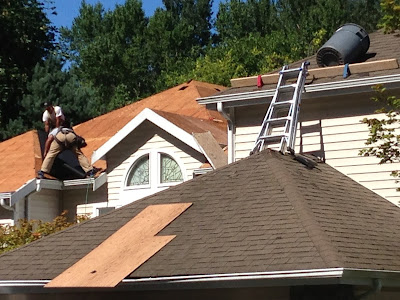 Tap tappy tap tap . . . “shave and a haircut.”
The rhythm is pounded out over and over
above my head, but without the “two bits” part.
That’s the sound the roofers on my house
this morning, fastening shingles in turtle-shell rows.
I’ve learned some stuff about roofs in the last few days.
Felt doesn’t mean poodle skirts to roofers, but black
tarry looking paper that keeps the plywood dry.
The words valleys and ridges don’t make roofers think of leisurely hikes,
either. I’ve watched the tear-off—pieces and bits of old roof—
sail down past my window into the open mouth
of a dump truck. Late afternoons I’ve swept up nails and
staples missed by the magnet dragger, and gathered
chunks of felt and shingles and yakked with neighbors
about how long this inconvenience will continue.
Now I sit here feeling somewhat peevish about the noise,
loud thumping overhead and tap tappy tap tap. Crackling sounds
like the roof is a bowl in which the makings of a giant’s omlet
is being prepared by thwacking eggs on its edge.
Amplified squeaking sounds like orthotics rubbing
inside a shoe, craving the silence of talcum, add fuel
to my imaginings of Colossus tromping overhead.
I sit here like a privileged spoiled and entitled woman
who couldn’t fix her own roof if her life depended on it,
probably not even one made of straw or twigs. Maybe not
even a blue tarp roof. Blanche Dubois and I both depend on the
kindness of strangers . . . or the desperation of strangers.
I can’t speak their language except to say hola and gracias.
“All roofers nowadays are Hispanic,” says the roofing
consultant when he talks to my Homeowners’ Association
about what to expect when the job begins.
“No one from here wants to do the work anymore,” he says,
and tells us that when he was in college
roofing was his summertime job. “Now these guys come over
from wherever  . . . uh, they’re fully documented . . .
and they do great work.” I waited for him to wink, but
to his credit, he didn't. He adds for emphasis,
“They will do the work and they’re good at what they do.”
It will reach 100 degrees on the roof today. The five men
working on it are all wearing straw hats, the kind I saw
being worn by workers in sugarcane fields in Puerto Rico
in 1957. One hat remained on the bushes at the end of
my walkway after the first day. It was frayed and sweaty,
the real thing, not like the tourist version you see when airplanes
arrive from Cabos San Lucas or Puerto Vallarta.
I sit at my desk, tapping my keyboard, at the same time
listening to the tap tappy tap tap on the roof. I wonder
how it must feel for men to be so frightfully hot,
bent over on their haunches or standing on ladders, nailing first plywood,
then felt, then shingles, wondering if they are
thinking about home and their families and
how much money they can make before the heat
defeats them—simply does them in—and if they
will live to see their paychecks.