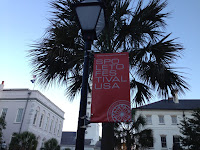 Looking for something to test my readiness to be "on my own in a group," I screwed my courage to the sticking place (thanks, Lady MacBeth and Mr. Shakespeare, for that GREAT metaphor) and signed up for a Road Scholar flex-program to the festival. I paid my money, booked my flight, ordered some extra tickets, packed my bag, and did it!  I’ve dreamed about attending the Spoleto Festival USA in Charleston, SC, since it first began forty years ago.

From June 1 through June 6, 2015, I immersed myself in the music and performance opportunities available at the mainstream festival with its international artists and specially assembled festival musicians— and its shadow festival, Piccolo Spoleto, with its hundreds of performances offered by mostly Charleston-area performing artists.

June 1 – 6 doesn’t sound like much of a time period. But I saw/heard fifteen programs in that time. Other than daily breakfasts, attending several lectures about Charleston and the festival itself, taking two walking tours and riding on a mule-pulled wagon through the historic section of Charleston, I was either at a performance, walking to a performance, or grabbing a meal to sustain energy for the next performance. Oh, sure . . . I slept. But I wish I hadn’t needed to.


I attended a small but stunning Australian circus, a Vietnamese water puppet show, “Romeo and Juliet” performed by The Globe Theatre, a new work commissioned by the festival for the Shen Wei Dance Arts, a festival performance of Bach’s “Passion According to St. Matthew” (the link takes you to a review that does it justice), a cabaret sampler of historic music, and four separate and glorious chamber music programs hosted by Geoff Nuttall with inspired and varied offerings.

I didn’t for one minute yawn. I didn’t for one minute wonder why I’d bought a ticket for this or that particular performance. I didn’t cough and sometimes I barely breathed. The festival was fabulous, with an energy and life to it that I haven’t experienced since I was an adolescent discovering the breadth and depth of music. I don’t know if it was because I was internalizing it more than usual because I was alone, or because the performances were truly amazing. A little of both, I suspect. Regardless, I haven’t felt that moved by musical performances for decades. The chemistry of passionate and gifted musicians coming together in non-routine constellations had something to do with it, too. The audience could feel the energy rippling and flowing over the edge of the stage.

Yes, I’m old . . . and my memory can be challenged annoyingly, but I hope to cling to the memories of Spoleto and the thrill of my audience participation for the rest of my life.
at 2:16 PM

Thought of you & stopped by your blog. This sounds like a wonderful trip!