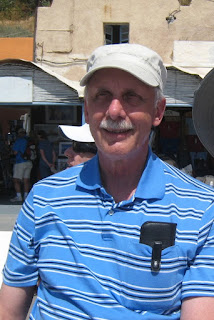 Today would have been Jay's seventy-sixth birthday. I found myself thinking about memorable birthday celebrations this morning, chuckling at one in particular.

As his twenty-ninth birthday approached, he began to get grumpy. "My carefree life is over. I don't want to be twenty-nine! That will mean I'm nearly thirty, and that seems so old!" As the day grew closer and he wasn't getting any happier about the idea of leaving age twenty-eight in the dust, I decided how I would cheer him up. A surprise party!

I created and mailed invitations to more than two-dozen friends, addressing the friends as though they were famous medical experts. I invited them to an important "Med-Alert Conference," the topic of which was Jay Glerum. Was there help for this man who was closing in on the end of his third decade? The subject believed he was doomed to "old age" without glory, I explained. Could the medical community gather together to give him an optimistic prognosis? I suggested that to enforce how important this conference was, they should arrive at the "conference" in their medical "uniforms" to accentuate its serious purpose. I received enthusiastic responses from more than twenty people.

As August 16, 1968, drew close, I had to be very careful to not let our children know about the event because they wouldn't have been able to keep the secret. (They were almost five, three, two, and four months.) I figured out how to hide the food I was preparing and the beverages I'd purchased; I schemed how to get the three older children to bed before the doorbell began ringing. (I ended up telling them about the surprise ten minutes before the first guest arrived because I realized the doorbell would keep them excited and unable to settle down. I was correct in assuming they could contain a secret for ten minutes.) I have a vague memory about them dancing around in hyper excitement as the guests began to arrive, but they went to bed without protest.)

Our first guest arrived at 7:25 p.m., five minutes before the start-time on the invitation. The doorbell rang, and I called out to Jay to please answer the door. I only wish I had been there to see his face! Jay thought the man standing there--well-known to him--had somehow crossed over into the world of senility or mental illness. On our doorstep stood our beloved, dignified, professor friend from undergraduate days who--even in his retirement--always wore a sport coat and usually a necktie. On that August Saturday evening back in 1968, Mr. Harrington was decked out in a tropical shirt, white pants and sandals, and wore a Voodoo mask.! Apologizing for arriving early (he'd taken the bus and had no control over its schedule), the Voodoo Doctor had to ask, "Well, are you going to invite me in?"

Within minutes, two butchers arrived (wearing bloody aprons and white hats, carrying saws) and Jay began to get the picture.Then Doctor Scholl rang the doorbell, wearing a large foot as a headdress, followed a bearded man arrived in a nurse's dress (he'd taken the bus and caused a stir!). When a real nurse showed up just off work and still in her professional outfit, the nurse in drag and the real nurse fell into a fit of giggles. Soon two horse doctors arrived, then a quack (in a Donald Duck suit). You get the drift. As the diversely outfitted friends kept on arriving, Jay never stopped smiling. Everything about the party was a huge and hilarious hit.

Jay recalled that infamous birthday party with affection almost every birthday after that. It also served a useful purpose unknown at the time, but revealed over the next forty-five years. He never again told me he was depressed about an approaching birthday. He didn't dare!

I remember that brithday party well and seeing John Gessner dressed as a nurse! What fun it was.