Not In MY Back Yard! 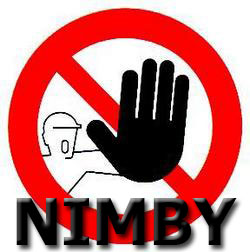 When I heard a story on NPR about people being up in arms about a Muslim cemetery proposed for a rural area in Massachusetts, I was intrigued. It seems that a large parcel of farmland, having been for sale for decades, finally had a buyer on the hook! But when the people who lived nearby found out the vacant tract of land would be used as a cemetery for Muslims, there was a huge NOT IN MY BACKYARD reaction.

Presumably, the wave of suspicion and distrust of the Islamic faith was driving the push-back. The radio story interviewed people from the surrounding area of Massachusetts. When asked why she was objecting, one woman said, "This is a quiet part of the state," implying that somehow the presence of graves would create a racket.

Another person said, "I don't want to hear that prayer-thing 'they' do  five times a day. This is is farmland!" implying that a mosque with its call to prayer would be needed to be situated there, as well. Since when do we imagine that the dead need to be called to prayer?

Real objections from more educated people were more rational. Because the purist Islamic interpretation of beliefs suggests that bodies be interred without the encumbrance of coffins, residents might have been justified in questioning how decaying bodies could affect the water table supplying local wells. Yet when the buyers assured the seller the cemetery would mandate coffins (even having it written into the purchase-and-sale agreement), that should have been sufficient. How can we be so hostile to the needs of our fellow citizens and human beings? 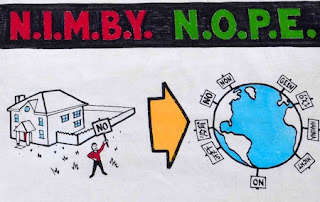 In my town, Bothell, there is a current NIMBY movement against proposed dormitory to house 500 undergraduates on a university campus. The people in the neighborhood are upset because "the noise of 500 students, the cars, the truck deliveries, the music, the parties, the comings and goings of that many students will ruin our peaceful neighborhood."

These are dorms for students--who are voluntarily taking classes beyond mandated high school. Dorms are built to house students who presumably want to live on campus so they have more time to study and don't have to spend time commuting. That doesn't mean they will spend all their saved-commute time with their windows open and music blasting outside. In fact, most student-played music will be heard only by them through their iPhone or iPod earphones. The comings and goings of automobiles shouldn't be a huge problem, either, because many of them don't own cars.

Sure, students can decide to have a little fun, throw a party, make some noise--maybe even get drunk and be obnoxious. That can happen in any neighborhood, can't it? From what I understand, noise ordinances in Bothell are not set up to accommodate any neighbors disturbed by excessive noise, so that issue needs to be solved separately. But to decide that a dorm is going to disrupt, even ruin, the entire neighborhood seems unfair.

I heard a similar argument from Bothell citizens who are outraged by the arrival of adult family homes and/or nursing homes in residential neighborhoods. The residents of those areas cite their imagined worries: excessive noise from emergency vehicles arriving day and night, careless driving by overworked and underpaid caregivers leaving their excessively exhausting and overlong shifts, deranged old people walking around the neighborhood, and parking shortages from the multiple family members streaming into the facilities to pay visits. All these things are surmised by the neighbors projecting the worst-case scenarios.

We all want to maintain the good life--whatever it may look like to us--and not let others 'in' to dilute or alter it. However, I suggest from my own experience that some of the great gifts in life are the inadvertent, uninvited occurrences that--if anticipated--we'd be certain we wouldn't like. Staying open to change and to others who happen to be a little bit different can be life changing in wonderful ways.
at 12:31 PM

Labels: Bothell, NIMBY, not in my backyard

Totally agree! I just posted a similar sentiment. People are so adverse to change. It colors every decision they make. Sad, but true. Thanks for sharing your experience.