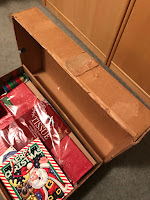 Our waste disposal company in Bothell, Recology Clean-Scapes, just sent its customers an email encouraging people to buy local to reduce the enormous amount of cardboard utilized this time of year in packaging for deliveries. It's true--I've noticed more cardboard than normal arriving at my house in the last few weeks, and by most people's standards, I get very few packages. But the several items I've ordered online (one was an ordinary food item no longer available at the four local grocery stores I visited) arrived with more packaging than may have been necessary. And yet, it's hard to be critical of the overkill of cardboard because good protective wrapping assures minimal damage when packages get dropped into sorting areas from conveyor belts and stacked on top of each other in delivery trucks. 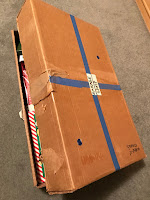 The email from Clean-Scapes brought to mind my own thirty-year-old Christmas wrapping-paper box. I guess I don't have to apologize to anyone for wasting that cardboard! The home office of Northwestern Mutual Life in Milwaukee ordered its premium-payment envelopes in boxes of 2,500. In the service division where I worked, one such carton of envelopes was delivered to our supplies area on a regular basis. Made of heavy-duty cardboard, the boxes had sturdy lids and were an especially convenient size for lots of things one might want to store at home under a bed! Service reps practically fought over whose turn it was to "recycle" (e.g. take home) the empty box.

After working at NML for three years, it dawned on me that I could use one of those boxes to store our leftover Christmas wrap, so I became the proud owner of an empty envelope box in 1985. Now, these thirty-plus years later, the very same box is loaded with ribbon, tissue, flat-paper, left-over cards and stickers and tags, the sole keeper of Christmas wrap at my house. I hauled it upstairs from the basement last week, marveling at how well it has held up through three moves, one of which was cross-country. Sure, it's pretty battered, but it's still sturdy!

It owes me nothing, and I'm pretty sure I qualify as a veritable poster child for recycled cardboard.
at 8:48 PM