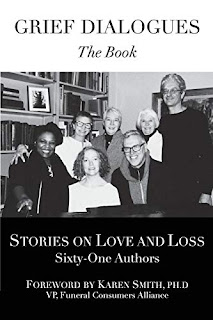 A recent anthology of essays, poems, and even a couple of short plays includes several items authored by me. As anyone who writes and submits their work knows, it can be terrifying to let someone putting a book together read previously non-critiqued work. Once the author sends off the submission, a storm of insecurity blows back hard, so it's all the more exciting when the word "acceptance" appears in the eventual response.

In December 2017 I submitted several poems and essays in response to a call by Elizabeth Coplan for short works on the topic of death and grief. In July 2018 I, along with sixty others heard good news. Acceptance! The book was rushed into print so it could be unveiled at the Reimagine End of Life week in NYC in late October, so not surprisingly, there were some typos and copy editing oversights in it. We all have experienced fallout from needing to accelerate a project too quickly.

After itemizing the small errors in my work and receiving confirmation changes had been made, I was confident in the revised first-edition, which was issued in late January. I was taken aback by the appearance of the same mistakes in the revision. But . . . I'm a big girl. I got over it.

Since 1990 I've been published in the following local outlets: Seattle Times, Prime Time, The Stranger, Eastside Journal, and University of Washington Alumni Travel Association, as well as a 2010 anthology by Nancy Worssam, In Our Prime: Empowering Essays by Women on Love, Family, Career, Aging, and Just Coping. With one exception, all that published work (multiple pieces in several of the outlets) had the correct attribution: Sara J. Glerum, my legal name. The Seattle Times published one of my travel pieces with lower-case j. as my middle initial, which annoyed me at the time. Probably no one notices but the author, but it's cringe-worthy to see myself in one volume as the following: Sarah Glerum (h and no middle initial), Sara Glerum (no middle initial), Sara J Glerum (no period after the J), as well as the 'real me,' Sara J. Glerum.

BUT . . . even with the "h" and no middle initial, I'm still happy to be in Grief Dialogues: Stories on Love and Loss, especially when I learned the book has been nominated for a Northwest Booksellers' Award because of its purpose. As you can probably guess, it's intended to help demystify death by talking about the one event in life we are guaranteed to experience. I'm proud to be part of the movement and the anthology.