What's fifty-seven years old, holds soup to nuts and everything in between while maintaining the versatility to become a toy, musical instrument, and even part of a costume?

When I received this set of mixing bowls at my bridal shower hosted by my mother's best friend in 1962, little did I expect they'd be a mainstay of my kitchen these sixty years later. As I chilled hard-boiled eggs before Easter this year, I realized what an amazing gift the bowls had been. At the time, I was unimpressed. Stainless mixing bowls?  Too practical to be exciting.

Within the first couple of years of my marriage and its subsequent arrival of babies, I became deeply appreciative of them, however. My toddler children played with them endlessly, inevitably discovering them in the one low kitchen cupboard that didn't have a child-proof lock on it. Stacking them was a source of endless delight--and the ringing of the steel as the bowls bounced off each other is also really fun sound when you're under two. 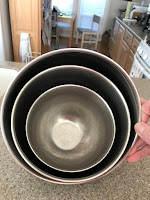 I've soaked beans in them and whipped up everything you could imagine from waffles, muffins, dips and granola, egg salad and jello. I've tinted frostings, cooled soups, and prepared and served endless offerings of salad and fruits in them. They've been used for water-play in the backyard, worn as hats in neighborhood parades, and been beaten with spoons for in-house celebrations. And every time I reach for one, I think of Harriette McLean, my mother's life-long friend who gave them to me so long ago. Thanks, Aunt Harriette. You sure knew how to pick a useful and lasting gift.
at 7:17 PM