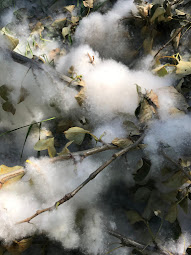 When the cottonwood trees bloom in my neighborhood, we joke that it looks like it's snowing. The fluff that transports its seeds is so lightweight it is blown everywhere and often accumulates along the sides of paths and roadways to look like pretend snow that a Hallmark movie director has ordered for a wintry effect. People complain. It gets into window screens and fans and clings to cobwebs on windows. It's tracked inside and can make your new black pants look like you live with a white cat. And it makes many people sneeze from their cottonwood allergies.   But deadly? I don't think most of us would think twice about answering that question in the negative. And yet, recently I saw something that made me think a lot about perspective and how it's so different, depending on who/what you are. Every trouble, every woe, every challenge is relative. As inconvenient as some people find cottonwood's bloom, or as beautiful as others believe it to be, everything depends on who, what, and where we are. 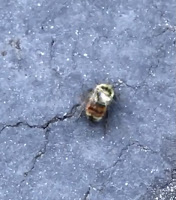 When I saw a little bee crawl-hopping across the street, I did a double take. Bees fly! The aren't pedestrians on a street. I stopped to investigate. A single cottonwood seed with its fluffy conveyor had landed on the bee. Maybe it had been flying, maybe it was gathering nectar from a blossom on the nearby rhododendron . . . we'll never know. What was clear is that the seed had adhered to the bee's wing to make flying impossible. I watched the bee struggle, standing on its front feet and shaking its body, opening its wings while performing a little jump-ity jump step, trying to shake off the seed off. As much as I wanted to help, I knew there was no way I could keep my touch light enough to not injure it. I held up a leaf in front of it; it walked on, Then I carried the leaf and the bee to the closest garden and laid it under a shrub. At least it would not get run over.

How cottonwood could be deadly to a living creature was an aha moment. Yes, perspective is everything. So I can enjoy the sight of cottonwood blowing through the air (or be inconvenienced by it, but to another living creature it's potentially as dangerous as hiking down the middle of a highway would be for me.