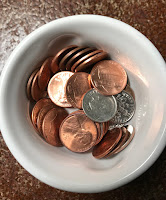 Every year since my late husband died, I've done something special on his birthday to remember him. Some years I've walked along one of his favorite beaches, either the fresh water of Lake Washington or the salt water of Elliott Bay. Sometimes I've enjoyed a lunch or dinner at one of his favorite restaurants (either upscale and fast food), always ordering what I imagine he would order. (After our long marriage, I know well what particular items on the menu made the restaurant a favorite of his.) Finally, I try always to visit a nearby location the two of us walked to frequently.

This year I had a new idea to commemorate his birthday. I would drop coins as I walked. Why? Because for as long as I knew him, he never walked past even a penny without stooping to pick it up. No matter what parking lot, what sidewalk, what store--anywhere at all--if there was a coin on the ground, Jay would lean over to pick it up with a general quip about a found coin being a lucky one.

On Monday, August 16, I counted out eighty-two cents (the age he would have been that day) in pennies and dimes and let my offspring know what I was planning. Several of them did the same where they live, making it especially celebratory. It still makes me happy to think a number of people might stop to pick up the coins and in so doing--albeit completely unaware--would be bowing down to the memory of Jay O. Glerum.