I wrote this a few years ago for myself, mostly, but I've decided to share this real life event that happened long-ago in my family. I've split the continuous narrative into three parts so the length isn't daunting. The other two sections will appear on this blog within the next few days.

Madame Sylvia’s first visit to our house was back in November of 1969. My mother had died in
August, but with four children under the age of seven I barely had time to weep, let alone reminisce and tenderly recall the happy parts of my mother’s life—the kinds of things that help a twenty-nine-year-old woman process a profound and personal loss. Other than occasionally excusing myself from child-tending for a minute or two to bury my face in my pillow and cry behind the closed bedroom door, my life continued uninterrupted as a homemaker, mother, and wife.

Only in the evenings, after the children were tucked in for the night, could my sister and I attend to the business of sorting through our deceased mother’s belongings. The two of us were the sole remaining members of our family of origin, and Sis, too, was rearing a young family. Gradually we sorted through Mother’s household effects so we could relinquish her rental house to the landlord. After each work session, we’d take things to our respective homes—kitchen utensils and foodstuffs, artwork, and clothing. Records and books and china and silver. Furniture. Photo albums. Bed and table linens, shoes, jewelry, and gift items purchased for birthdays yet to happen. Piles for friends and thrift shops, piles for us, too. 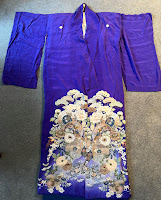 On one of those nights, I broke down weeping as I unfolded Mother’s glamorous dressing gown with flowing sleeves, a deep purply-blue kimono accented with a floral pattern. The garment, along with a delicately tie-dyed sash of saffron yellow and rust, had been a wedding gift in 1934 to Mother from an honorary member of my dad’s family, a Japanese man who—as a student—had been employed by my grandparents. Mother only wore the robe when she was getting ready to go out for a gala evening with our father. She’d bathe and put on her best lingerie, then wrap herself in the kimono to fix her hair, put on jewelry, apply lipstick, and perfume. Neither my sister nor I could imagine giving away the kimono. Although I couldn’t visualize myself wearing it (I am not the type to put on a glamorous cover-up while getting ready for a dressy evening), I was happy to take it to my house.

Naturally, our house with its six occupants was not long on storage space, so I rolled it up in a paper bag and put it in a box in the basement. One of these days, I thought, I’ll show the robe to my children and tell them about the happy times when their Nana wore it—then I’ll find a place to permanently store it. Little did I know that in just a few weeks the kimono would become intrinsically woven into my own family’s history.

On that particular blustery, rainy November evening, my husband was exhausted and trying to read the newspaper to relax from the stresses of his workday. I had bathed, pajamaed, and tooth-brushed the children so they were ready for their nightly story. They often got silly before bed, but this night they were wilder than usual, pushing and shoving and sticking out tongues and belching in each other’s faces. Although they were just overtired and over-stimulated, in my head they were momentarily monsters. I thought about the praise of strangers whenever we’d go anywhere in public. “You have the sweetest, best-behaved children,” they would say in many variations. Whenever I took my children anywhere, it was as if I were tending four cherubs. But in my own home that night, I was tending fiends!

“Quiet, children! I am not going to read to you if you don’t stop this now!” I might as well have been talking to a wall. They were pushing and tickling each other, wildly racing around the living room. Why are they so rude to their mother when they’re so nice for strangers?  I wondered. Why would anyone read to them when they are this horrible? I wanted to scream in frustration.

Suddenly I had an idea. Leaving the children in the living room, I rushed into the family room where their dad was dozing off behind his newspaper. “Keep an eye on the children—they’re absolutely wild. I’m in the midst of an idea,” I said as I started down the basement stairs, “and answer the doorbell when it rings!”  I grabbed the paper bag with the kimono and sash, then tore back upstairs, darting into our bedroom to rummage through my dresser drawers and the closet. I grabbed green linen high heeled shoes I’d not worn in six years, a flowing scarf sitting idle since college, and wild dangly earrings I’d bought for a part in a college, then rushed to the back door and stepped outside.

Under the cover of the patio roof, I pulled off my clogs, stepped into the heels, pinched on the earrings, and tied the colorful scarf over my hair. I pulled the kimono over my clothes, tying it with two wraps on the saffron-colored sash. I sprinted through the rain by the side of the house, and breathlessly climbed the four steps to the front porch where I reached for the doorbell.

I could hear instant quiet from within. “Daddy, someone’s at the door,” called the oldest, her voice was muffled but I knew exactly what she was saying. I had drilled into my children’s heads that only an adult could open the front door if we weren’t expecting company. As I waited for the door to open, I hurriedly put together my opening lines. The door bolt turned and the door opened, sucking the storm door into the doorjamb with a snap. Behind the glass storm door all four children crowded, their dad behind them. I introduced myself as he unlatched the storm door but before he could open his mouth to say anything.

“Good evening, children” I said in a thick, faked accent, mostly French, a little-bit Czech and German.  I looked at each of them as I continued. “I am Madame Sylvia (Muh-dahm Seal-via) and I am a traveling storyteller (traffelling storytelleer). I read to children (shield-wren) before their bedtime (zehr bedtime).” I directly eyeballed my husband. “May I come in, sir?”