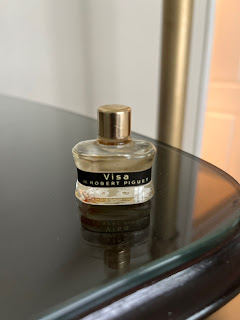 Women of a certain age (try over 70) will no doubt remember being asked that question. If not, it's likely they didn't wear any scent. When I was growing up, it was taken for granted that most adult females wore cologne, toilet water (lol, even that term can mystify some young people today), or perfume.

I was not alone in the years of older teen-hood and early twenties as I searched for my signature fragrance. Every department store had multiple sales women walking around with sample scents to try. Most of the college-age women I knew wanted to have a gentle fragrance that would be associated with us and unique in our circle of friends. Did we really want others to know we were around the corner? or had arrived at a party? I hope not . . . but I digress. Fine perfumeries and cosmetics companies still create and market fragrances, but thankfully, patronizing public spaces while doused in your personal scent is no longer an acceptable norm.

I was twenty years old --1960-- when I found my scent, a French perfume called Visa by Robert Piguet.  I was in Paris with my parents and tried a sample at a Parisian perfumery. It was so beguiling (both Mother and Dad said it was a lovely fragrance, as wafted from my wrist to their nostrils) that I bought a small bottle and began to wear it. It was entirely mine. No one I knew had ever smelled it, heard of it, or noticed it for sale before. Months later when I had used up the small bottle, I had to research where I could buy it in the USA; it was tricky to find. Nevertheless, there was a distributor somewhere in New Jersey, as I recall, that put me in touch with a Seattle specialty shop carrying it. Eventually I had to order it from a perfumery in New York.

As the years went on, it began to be more and more difficult to find. I'll spare you the details and perhaps you've already figured out why my favorite perfume either had to be discontinued or renamed. Yup, my lovely scent had become a brand-name of a new concept and EXTREMELY popular product called the 'universal charge card.' Gulp.

And who wanted to smell like a credit card? Was there any market for a perfume with that name?  I'm sure sales plummeted and eventually Visa by Robert Piguet was no longer to be found even at the New York perfumery. I kept hoping Robert Piguet would rename it and market it under a new moniker, but no. The scent was retired forever in the early '80s.

This tiny bottle in the photo goes back, I believe, to my first purchase in Paris. Of course, these sixty-plus years later, opening the cap releases the putrid stink that only perfume-gone-bad can exude, but I've kept the empty bottle tightly closed as a reminder of an aspect of the person I once was. I am tossing it away today as I begin a giant downsize for a giant move I'll be making. More about that to come. I thought it only fitting the the first thing to throw out would be the smallest thing I own. The photo and this post will help me remember those long ago days and my personal scent called Visa!